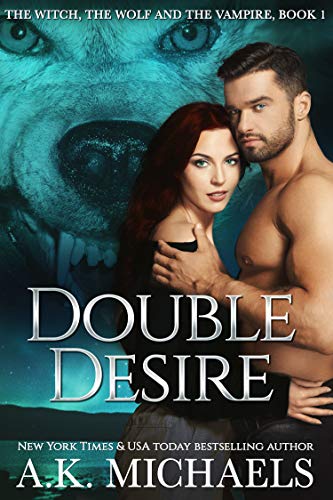 Book: The Witch, The Wolf and The Vampire by A K Michaels

about this book: Peri had been on the run since she was fifteen, now nearly twenty two she mostly lives out of her car. Earning cash any way she can, she uses her magic to find guys for a lazy Bounty Hunter for cash in hand. She takes all the risks while he sits back and let's her! In Vegas, on the trail of another bounty she runs into quite a situation, quite a crowd from the bar her target just left and who are not happy at a young girl taking down two of their drinking buddies!

Peri knows she could use her magic but the amount she would have to use would attract the ones she is running from! She doesn't see a way out until an ancient vampire and his best friend, a strong wolf, come to her aid. However, Peri gets hurt and ends up unconscious in the vampire's arms.

Josef the vampire stares down at this waif in his arms and feels something deep inside! Who is this girl? What is this girl? He can sense an immense power inside her and his curiosity is more than a little peaked!

Gave the wolf is also drawn to this little witch, his feelings clear. He would like nothing more than to get her in his bed. Or rather, their bed! After all, the vampire and wolf shared most of their women!

Can these two help the runaway? Can Peri help the two males? Make both happy?