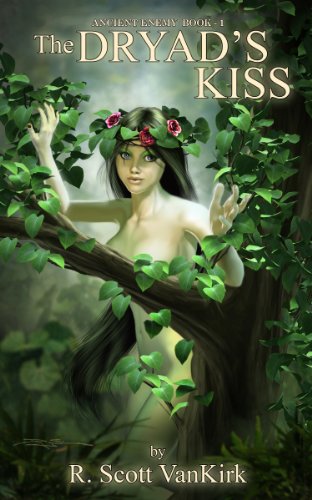 about this book: The Dryad's Kiss is the first book in a new urban fantasy epic name Ancient Enemy.

This multi-volume series follows the adventures of Ian Finn Morgenstern as he discovers the hidden history of our world. The story starts in a small town in Ohio and grows encompass a world spanning conflict begun over 70,000 years ago. The series will follow Finn in his epic journey from a naïve, humble young man to key defender of humanity.

Finn is an extremely bright and moral young man who always tries to do the right thing. He tells his story in a humorous, self-deprecating voice. He's a good guy with a knack for finding old, lost artifacts and a genetic heritage he is completely unaware of. Finn would describe himself (in the words of Gary Hart) as "A pleasant encounter for those who dislike encounters," though few of those who know him would agree.

The seeds of the Ancient Enemy series can be found in the marriage of a very odd couple: my love of urban fantasy, and the near extinction of the human race 70,000 years ago. The genetic record indicates that the human population was reduced to somewhere around one thousand men and women.

A volcanic eruption followed by global climate change is currently thought to be the cause of this extinction event, but it is interesting to note that other species did not seem to be effected to the same degree as homo-sapiens. This sparked the idea that maybe, there was more going on than we knew. Maybe other factors were working against us at the time.

The human race, in its present form, has been around for a hundred thousand years, yet our current civilization was built in just the last five thousand or so. What were we doing before then? Who's to say that our level of civilization wasn't reached before, only to fall and be forgotten. If so, what happened to the remains of that civilization? Why don't we find buried evidence of high tech and industry?

The answer is buried in humanities collective unconscious – magic. We first evolved on a world filled with magic, and our minds evolved to deal with a universe of magic, a universe that is perhaps more amenable to our will and works more in accordance to the beliefs of most early human cultures.

The thesis behind Ancient Enemy is that humanity's earliest civilization was built on magic over seventy thousand years ago. That civilization collapsed when the magic went away or was taken away, leaving very little evidence behind. When the magically augmented buildings and other trappings of civilization vanished, the remaining human population was dumped into a new, hostile, mechanistic world dominated by the laws of thermodynamics which they were unequipped to deal with. This is what killed off most of the human race.

Why did this happen? What caused such a fundamental shift in our world and could that shift be reversed? What would happen if the magic did come back? How would our current civilization cope, and what might our ancient enemies think of our re-emergence from "barbarism"?

These are just some the questions explored in this series on top of many more. It takes a very science-fiction style approach to magic. In scifi, the author explores a world changed by a single advance or a combination of new, powerful technologies. Here that technology is magic. It's not a big leap. After all "Any sufficiently advanced magic is indistinguishable from technology"

I hope people, following Finn's journey, will enjoy discovering the real history and heritage of mankind as much as I did.