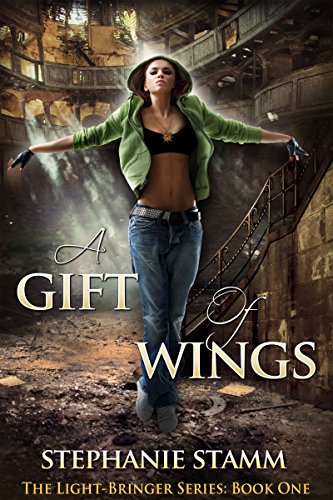 Book: A Gift of Wings (The Light-Bringer Series) by Stephanie Stamm

about this book: Half-Seraph and skilled fighter, Aidan Townsend could no longer live with the consequences of being a celebrated member of the Forces of the Fallen—so he walked away from it all. Now, he has created a new life for himself—a human life—as songwriter and lead singer for a successful Chicago band. And he keeps his angelic abilities carefully hidden—even from himself.

Lucky Monroe is just an ordinary girl—or so she thinks. About to turn eighteen and with high school behind her, she’s looking for a job, contemplating the possibility of college, and gradually coming to terms with her beloved grandmother’s descent into early-onset Alzheimer’s. Then her cousin Josh takes her to hear a popular local band—and she sees fiery wings extending from the back of the handsome and charismatic lead singer. Suddenly, she finds herself enmeshed in a world of Fallen angels, demons, and ancient deities—a world that promises knowledge of her newfound powers, as well as a budding romance, but also threatens all she holds dear.