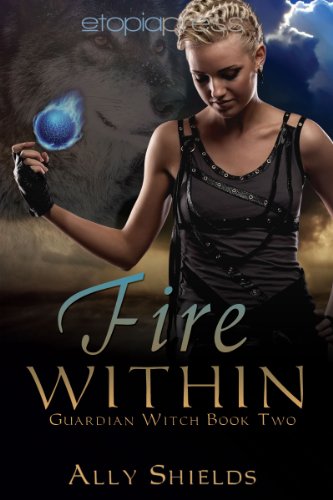 about this book: Fire Within is a continuation of the story line featuring witch cop Ari Calin that began in Awakening the Fire, book one of this urban fantasy series.

Eight months have passed, and Ari has returned to her responsibilities as the Guardian for Riverdale's Olde Town district. She continues to avoid Andreas De Luca, the charming, aristocratic vampire who turned her world topsy turvy in book one. In fact, life is fairly quiet, except for the dreams, part of an ancient enchantment that only reinforces her need to stay away from the sexy vampire.

When a vampire is murdered and Ari's human reporter friend Eddie is arrested as the prime suspect, Ari and her human cop partner Ryan argue over Eddie's guilt. Determined to prove Eddie is innocent, Ari finds other suspects who have motives as strong as Eddie's. Just when she thinks she is making progress, the case changes completely with a second vampire death. Ari and Ryan suspect Riverdale has a vampire hate group or a serial killer targeting the undead.

Andreas shows up at the second murder scene demanding to be included in the investigation on behalf of the vampire authorities. Mindful of her family enchantment, his help is the last thing Ari wants, and she tries to send him away. Andreas refuses to leave, declaring he'll be investigating with or without her help or approval. She reluctantly agrees to work together.

The three investigators quickly realize the situation is more frightening than imagined, that an ancient evil is hiding among them--and it looks as if Andreas is on the killer's hit list.