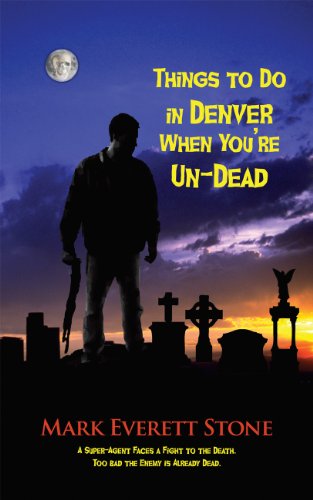 Book: Things to Do in Denver When You're Un-Dead (FROM THE FILES OF THE BSI) by Mark Everett Stone

about this book: Ten years in the hardest, most dangerous job on the planet has made Kal Hakala one tough mother. From the depths of that shadowy place where all the things that go bump in the night hail from, the World Under, comes those creatures that feed on man. From griffins to harpies to demons, the entities from the World Under plague mankind the world over and it's Kal's job to kick ass and chew bubblegum...and usually he's out of bubblegum.

When a routine zombie-slaying in Denver turns out to be a game of cat-and-mouse with a serial killer called The Organ Donor, Kal finally figures out that he's on the trail of something, or someone, that's as smart and as tough as he is.

With time running out for Kal and the Bureau of Supernatural Investigations, he has to find the bad guy and somehow keep the members of his team alive, but will it be enough, or has the best that's ever been finally met his match?