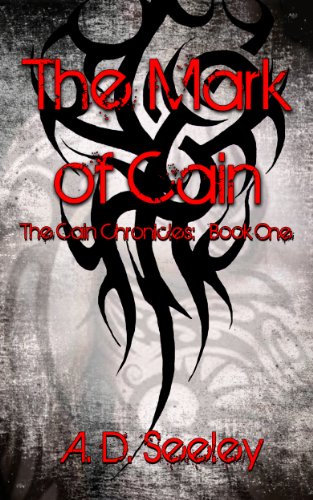 Book: The Mark of Cain (The Cain Chronicles - Book One) by A.D. Seeley

about this book: I've always been obsessed with history, so when I had a dream about Vlad the Impaler, I wasn't surprised. However, when the twist at the end of my dream came, showing me that Vlad the Impaler was really the immortal Cain, Adam and Eve's firstborn son, I knew I had a fresh take on a story that's been told for centuries. And thus was born The Cain Chronicles.

The Cain Chronicles isn't meant to be a religious story, though it has characters from the Bible in it. More it's a story about the personal journey of the world's first murderer. It's about the lowest points of his life, as well as the highest points of his life. It follows him from birth to present day, with flashbacks in history throughout the trilogy. I did a lot of research, but then I added my own twists to history as we know it, as the character of Cain has rewritten it all to tell what he wants told.

The Mark of Cain follows Cain as he works to corrupt Hara, an innocent girl whose very life is foretold in a great prophecy stating that she will somehow challenge Cain's interests. Because of this, he has her and her family murdered. But The Order, a secret sect made to destroy Cain and his clandestine empire, hid her away in a secluded Catholic orphanage. When she accidentally comes into Cain's life after she's left the orphanage, Cain plans to kill her. But then he realizes that if he does, in her child-like state, she'll become a martyr for God. Because he doesn't want God to have any more soldiers doing his bidding, Cain plans to corrupt her. Only once she belongs to him can he kill her. But The Order won't go down without a fight. They've hidden people in Hara's life to keep her on her holy path.

This book has romantic undercurrents, but the reader's knowledge of what Cain is really after makes it so those aren't too strong for male readers. There is some violence that makes this a book for readers 16 years and above, though it's not too descriptive in the violence to be too much for most people. If you're looking for something original and thought-provoking, but also an easy read, then The Mark of Cain is for you.