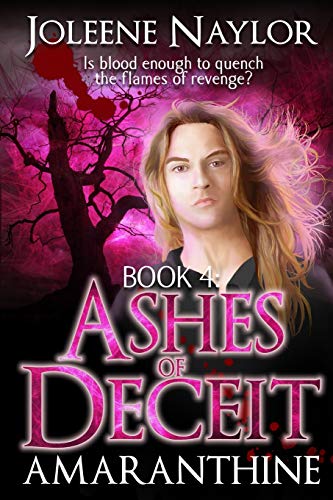 about this book: The fourth book in the Amaranthine series opens as Katelina, Jorick and Oren set off to rescue a kidnapped vampire. His captivity leads to uncomfortable questions such as how could humans have subdued him, and leads to a surprising culprit.

Oren's war with The Guild is drawing close and he's looking for recruits. he makes a deal with the kidnapped vampire's coven that drags Katelina and Jorick into a bloody battle whose outcome leaves her shaken. To avoid any more fighting, Jorick plans to take her to mexico, but their plans are interrupted by a pair of Executioners. It seems that fate is determined to keep them elbow deep in blood.

Ashes of Deceit sees the return of many old characters and a few new ones, including the ever popular Verchiel. But, when Oren's attack on the citadel goes awry, how many of them will make it to the final page?

Not for tweens. This is an adult book with perhaps more violence than the others in the series. Contains medium heat sex and a scene that leaves readers arguing whether or not Katelina cheated. Read it and decide for yourself.

Other books by Joleene Naylor