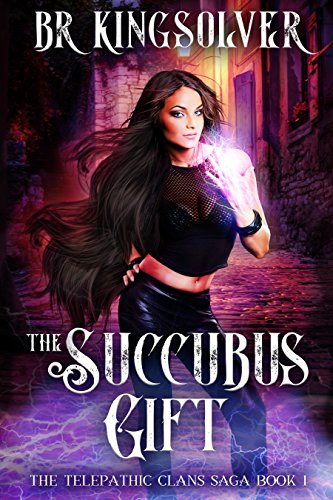 about this book: Orphaned at eight, lost to her parents' families who thought she was dead also, it was a shock when Brenna tripped over her cousin one evening. She didn't know he was her cousin, just that he was another telepath. The revelation that an entire telepathic society was hidden in society's shadows turned her life upside down.

An even bigger shock was discovering she was possibly the strongest telepath in history. The Goddess blesses Her people with 25 Telepathic Gifts. In addition to Telepathy, the Gifts include command over Air and Fire, Telekinesis and Teleportation. In over 2,500 years, She has never bestowed more than 15 Gifts on a single person. One of those Gifts completely changed Brenna's self-perception. She had the Kashani Gift, commonly called the Succubus Gift.

Her spectacular physical beauty combined with physiological and mental differences separated her from normal women. Mental gifts enhanced her ability to attract men. Pheromones a hundred times stronger than normal, and vaginal musculature that drove men mad were the upside. The downside was she drained three quarters of a man's life energy when he climaxed. It wasn't something she could control or prevent.

She would have despaired if not for tall, handsome Collin Doyle, a powerful telepath himself. He knew what she was, but professed to be in love with her. He told her he didn't care if she slept with other men and even after she took him to bed and drained him, showed her his mind and made her believe.

As if that wasn't enough to create chaos in her life, telepaths from Europe were hunting succubi, torturing and killing them. And Brenna's joining her family made her a target.

The Succubus Gift is Book 1 in the Telepathic Clans Saga