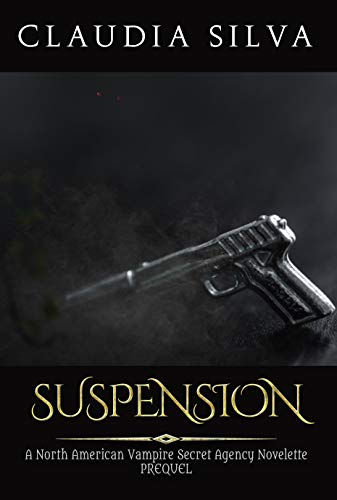 about this book: This book is the prequel to my vampire secret agency series.

The series begins with a young woman, Rebecca, who is plucked out of her town by a vampires who mysteriously seems to be interested in turning her into a vampire and recruiting her to the vampire agency he is a member of.

In this prequel story, vampire and werewolf hunter Dylan Torrence has been feeding his vampire side more than his human side. The director of the agency feels he needs to help him remember his human origin. Dylan is suspended from the agency and sent to decide who he will take on as a partner.

This story gives hints as to why Dylan chose Rebecca, which will alter both their lives during the six-part series.

I decided the cover needed to be a little more low-key than the rest of the covers, so I created a template that I would be using on the three short stories I plan to publish as companions for the series. In this cover, we can see Dylan's gun, which he is forced to leave behind as he is suspended from the agency.

Other books by Claudia Silva (more)