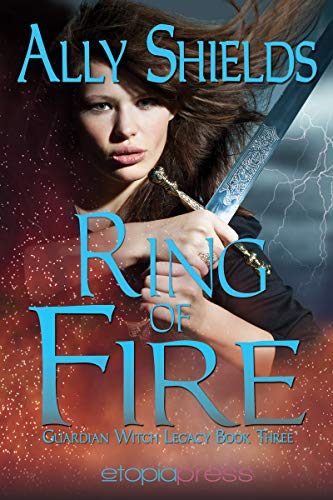 about this book: It has been a long road to Ring of Fire (Guardian Witch Legacy #3). The original Guardian Witch books began in 2012 telling the story of fire witch Arianna, a supernatural cop on her first murder case, and her meeting with Andreas the vampire. That 7-book series was complete in 2015. I thought I was finished writing in the Guardian Witch universe.

Then my publisher requested a sequel series. It felt like coming home to people I knew when I began the Guardian Witch Legacy trilogy about their daughter Rayne coming of age. In book one she is five years old and twelve in book two. Ari and Andreas remain the main characters keeping her safe until her appointed destiny. In Ring of Fire, Rayne comes into her own, testing her skills, her feelings, her friendships...and her courage.

Her eighteenth birthday may be her last. The Esielen Prophecy has foretold that on that date an ancient plague daemon will rise to take vengeance against the world that threw him out centuries ago. Now, Rayne alone stands between him and earth's survival.