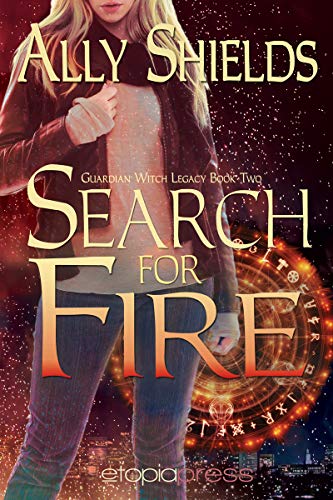 about this book: The Guardian Witch Legacy trilogy, a sequel 3-book arc to the 7-book Guardian Witch series, centers around Rayne, the child of Guardian witch Arianna and her warlock vampire husband Andreas.

Rayne was born with a tattoo-like star birthmark that designates her as the Chosen of the mysterious, world-in-peril Esielen Prophecy. In book #1, Embers of Fire, Rayne is only five, and the story centers around her parents as they learn the prophecy exists and may foretell a future confrontation between Rayne and a major daemon.

In Search for Fire, Rayne is now twelve with a mind and voice of her own. Her POV appears often in the story as she and her parents search for the prophecy keepers who live in Tuscany, Italy and hold more information about Rayne's role in the prophecy. Shortly after Rayne and her parents arrive at his Italian estate, Andreas is called back to Riverdale due to a crisis in his vampire court. While he is dealing with attacks at home, Ari and Rayne run into an even bigger threat in Italy and become separated. The family is apart, just when they need each other the most.

Ring of Fire, the final chapter of the trilogy, is already drafted and should be released early in 2019.