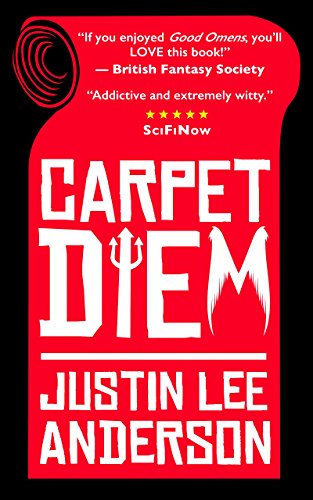 Book: Carpet Diem - or How to Save the World by Accident by Justin Lee Anderson

about this book: Carpet Diem began as a bit of an odd idea: what if something as mundane as your living room carpet was the deciding factor in a bet between God and Satan?

I wanted to write something that surprised readers, where the expected cliches and tropes were turned on their heads, where the storyline was as messy and unpredictable as real life, and where the characters talked like real people. I'm delighted it has been so popular, especially with the audiobook winning the 2018 Audie award for Humour.

The book has had glowing reviews from the likes of the British Fantasy Society, SciFiNow and Audiofile magazine, but I think a few of my favourites are customer reviews from Amazon:

• "If you locked Tom Holt in a room with Douglas Adams, Neil Gaiman and Terry Pratchett with a PC and gave them tequila for long enough, the resulting novel would probably be something like Carpet Diem."

• "I wanted to describe how such a seemingly simple, shallow story could be overflowing with richness, depth, humor, and seriousness, but I can't seem to do it very well. I'll just say it's a unique tale and suggest you give it a try."

I think, between them, those nicely sum up everything I hoped for Carpet Diem.