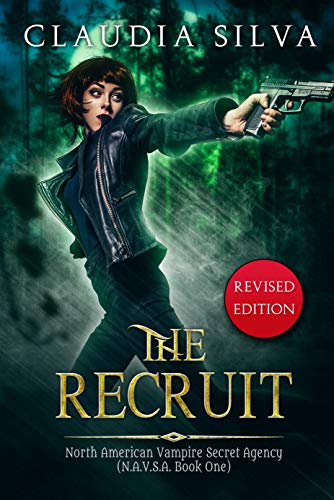 about this book: The Recruit is about Rebecca Sawyer's initiation into a secret vampire government agency. It is a different take on vampires as they fight werewolves with the help of witches. Even when The Recruit is only the origin, the next five books of the series are filled with adventure. It is totally worth it.

The series was inspired by a dream I had, which became part of one of the scenes in book two. I created a whole universe with its own set of rules for these paranormal creatures and I just couldn't help keep writing their adventures.

This book is for readers who like the supernatural, action and adventure; especially vampires, werewolves, and witches as they relate to each other.

I wrote this book 18 years ago, and have written over 20 stories in this universe. I am just now revamping the series for publication. There have been many versions of The Recruit and probably took me about two years to polish this latest version.

Even when I called it "Genesis" in the beginning, I thought "The Recruit" was more appropriate because it tells how an experienced werewolf hunter goes to a small town to recruit the most unlikely candidate.

Since this is my first published book, I have learned a LOT since its publication. I learned to get good covers, write interesting blurbs, and many things about trying to market my books.

You won't regret reading the first part of this series, it gets better and better.

Here are some reviews for The Recruit:

• "... this story is like none other I've ever read - about vampires. Yes, vampires. In the nearly eight decades I've been around this is far and away the best of that genre I've ever read." - Amazon Canada Top 1000 Reviewer

Other books by Claudia Silva (more)