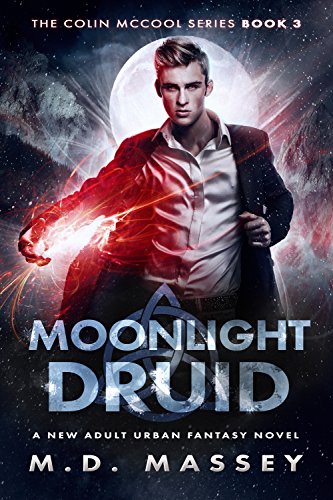 about this book: Moonlight Druid is the third urban fantasy novel in the Colin McCool paranormal suspense series. In this book, Colin decides he needs to learn how to control his curse, which turns him into a violent, deadly creature at the worst possible times. To do so, he goes to the local werewolf pack alpha for help, and gets way more than he bargained for in the process.

• What inspired you to write this book?
This is the third book in the first Junkyard Druid tetralogy, sort of the beginning of the third act for the entire four-book story arc. So, I needed this book to be grim and way grittier than the other books, because this is the point where Colin is going through his dark night of the soul. Tackling the issue of sex trafficking fit right in with the story arc. I hope the book helps to increase awareness about how widespread the problem is now in America.

• Who are the primary readers of your book?
Anyone who loves action-packed urban fantasy and paranormal suspense books will enjoy this novel. I've received quite a bit of positive feedback from readers who enjoy books by Kevin Hearne, Jim Butcher, Shayne Silvers, and Patricia Briggs.

• How long did it take to write it?
I spent the last three months working on the novel. I'm getting faster as a writer, and I'm learning how to keep my writing output high while maintaining quality. So, the first draft went fairly quickly. However, with this book my editor and I spent more time working on story edits and revisions than we had in previous books in the series. That added several weeks to the entire process, but it was worth it.

• How did you come up with the title?
Obviously, the titles are descriptive of events and themes that occur within each story. In this novel, Colin spends a lot of time running around the woods at night with werewolves. It seemed an easy choice.

• Why did you choose this cover?
I just send my cover artist ideas for what I want, and she makes it happen. This is actually my favorite cover design yet, although my designer recently sent me some really hot covers for the next three books in the series that I like even more. My cover artist always knocks it out of the park, which is great because getting a new cover always gets me stoked to write the next book.

• What was the hardest part of writing your book?
Definitely, writing the scenes that had to do with child abuse and torture. That was tough. I'd finish writing on those days and all I wanted to do was sip rye whiskey and binge-watch my favorite shows on Netflix for the rest of the day.

• Did you do research for your book?
I did some research on sex trafficking, and some on outlaw biker culture. I knew something about each topic, but of course it never hurts to do more research for a novel. I'd known some hardcore bikers when I was younger, and I used to work with a guy who'd been in a one-percenter MC, but it had been years since I'd been around anyone familiar with the culture. So, it was fun to get back into that world in preparation for writing the book. I did my best to portray bikers in a positive light. They often get a bad rap, in most cases undeservedly so.

• Did you learn anything from writing your book and what was it?
I learned that I can write a much longer novel than is common in the urban fantasy genre, and still tell a fast-paced story. The book weighs in at over 90,000 words, so it's the longest Colin McCool novel yet. It was challenging at times to get the pace just right, but based on early reader feedback I think we nailed it.

• What do you want to say to your readers?
I believe that writers don't have fans; instead, they have readers who are fans of their stories and characters. Obviously, without my readers I wouldn't have a career as a novelist. So as always, thanks for your support and for continuing to purchase and read my work.