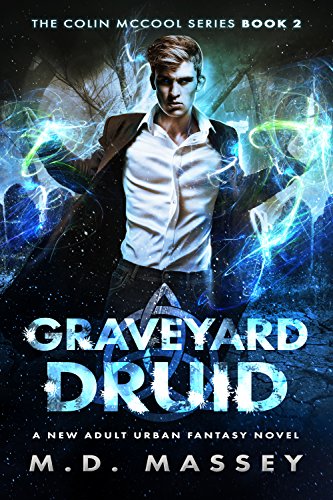 about this book: Graveyard Druid follows the further exploits of Colin McCool, everyone's favorite down-on-his-luck druid. It's the follow-up to Junkyard Druid. In this second installment in the Colin McCool series, Colin is hired by Luther, the leader of the local vampire coven, to track down and eliminate a ghoul infestation, so the vamps don't get blamed for it.

However, during the course of Colin's investigation he discovers that there is much more going on than just rogue vampires creating more undead. As usual, he's soon in way over his head, and he's forced to used all his wits and magical tricks to defeat this new, as-yet unseen foe. Of course, he gets more than a little help from his friends, including his mentor Finnegas, Belladonna, Hemi, and of course advice from his primary frenemy, Maeve.

• What inspired you to write this book?
I wanted to write an urban fantasy series about druids that didn't follow the typical Dungeons & Dragons inspired tropes. For the most part, when you see a druid portrayed in fantasy they are just glorified magical eco-warriors. That's fun and all, but if you look at the historical druids, and the druids who show up in Irish folklore, they are much different.

Historically, druids were priests, seers, and advisers to the Celtic royalty. But in the epics, druids were often the movers behind the scenes, much like Gandalf, or Allanon in the early Terry Brooks novels. They were kingmakers, and would also take the odd hero under their wing to train them in the ways of druidry and war. That's the sort of druid society I wanted to portray, not a bunch of tree-huggers in burlap using magic to grow stronger tea leaves.

• Who are the primary readers of your book?
My goal in writing this series was to provide readers with the same thrills and enjoyment I get from reading books by urban fantasy authors such as Patricia Briggs, Neil Gaiman, Kevin Hearne, Pippa DaCosta, and S.M. Reine. Hopefully, the story fits the bill.

• How long did it take to write it?
I started it in November, and finished it in February. For some, that's a short period of time in which to write a full-length novel with a somewhat complex plot and decent character development and world-building. However, for me it seemed like a long time. I like to turn books around fast to keep my readers interested. I think this next book in the series, Moonlight Druid, will go much faster, mostly because I have a better handle on the world and characters now.

• How did you come up with the title?
Well, the title for the first book just hit me while I was brainstorming, thinking of ways I could flip the script on common urban fantasy tropes. So, Junkyard Druid, Graveyard Druid, Moonlight Druid… I think it's easy to see the themes inherent to the series and each title.

• Why did you choose this cover?
I found a fantastic cover artist (no, I'm not sharing so don't ask) and she comes up with these amazing covers based on the ideas I give her. I wanted to show Colin casting magic in a graveyard at night, and she nailed the mood and tone.

• What was the hardest part of writing your book?
Ask any author and they'll tell you that it's always difficult to follow-up a successful first book in a series. The pressure to get the second book right and to meet reader expectations is very high. So, I think the most difficult part was beating my own self-doubt. But, once I got into the story and it started flowing, the rest was easy. I had a hell of a lot of fun writing this novel, and I'll gladly write a dozen Colin McCool novels if that's what readers want.

• Did you do research for your book?
I did quite a bit of research on local graveyards, as well as the tunnel and sewer systems under Austin. Did you know there's an entire network of tunnels under the University of Texas campus downtown? There's also a huge water drainage tunnel under downtown Austin, a recent project that was just completed. It's amazing what you find out when you do a little digging.

I also visited the old City Graveyard here in Austin, which is where roughly twenty percent of the book takes place. I took a ton of photos, and spent the better part of a weekday morning walking around the place. There's so much history there. I was shocked that so much of the city's heritage is sitting right there in Oakwood Cemetery. I'd driven by at least a thousand times and never had a clue.

• Did you learn anything from writing your book and what was it?
I learned that you only get better as a writer by stretching yourself, by attempting a bit more than you've done before. Readers have commented that my plotting is getting better, which is to say not as linear as it was in my first series. Of course, those books are action novels set in a paranormal apocalypse, so they don't require complex plotting. But the McCool books are classified as paranormal mystery and suspense, as well as urban fantasy, so they call for a bit more dimension, plot-wise.

• What do you want to say to your readers?
I'd like to say thank you so much for supporting my work thus far. Especially, thank you for all the kind feedback on the Colin McCool books. Every good review you leave helps keep your favorite authors writing more books. So, thank you for supporting my novels with your reviews. I'll keep 'em coming, as long as readers keep reading them.