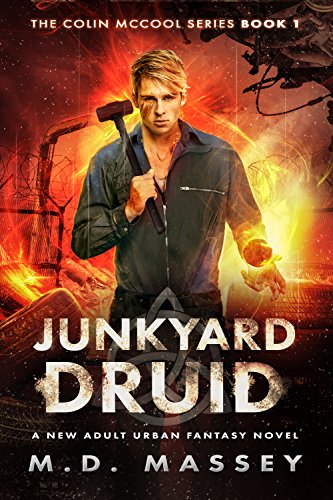 about this book: Junkyard Druid is a new adult urban fantasy novel about a guy named Colin McCool who happens to be descended from the great Irish hero, Fionn MacCumhaill. Colin has been trained by a druid to hunt the unseelie fae and other supernatural creatures that pose a threat to humankind.

Unfortunately, Colin has also been saddled with a really nasty curse that completely turns his world upside down. I don't want to give too much away, but suffice it to say that he deals with a lot of tragedy early in the book, and somehow has to come back from it to save the day.

• What does this book offer readers?
If you're an urban fantasy reader or even a paranormal romance reader, it should be right up your alley. Even though it's light on romance (there's a subplot regarding a romance between Colin and a ghost, but its inclusion hardly qualifies the book as PNR), I think readers of both genres will find something to enjoy in this novel.

For starters, the book begins in action and maintains a crisp pace throughout. Also, there's a whole menagerie of supporting characters and supernatural creatures, which is something I always enjoy when I'm reading urban fantasy. And finally, the book provides a glimpse into some fun Irish folklore that's interwoven into the plot. If you like reading fantasy books about fae, vampires, shifters, and magic, you'll enjoy this book.

• What inspired you to write this book?
Back in 2010 or 2011, I had been writing fiction for a while but had yet to publish any of it. That was mostly because none of it had been good enough to finish. I decided that I needed to choose a topic and create some characters that I really cared about, and I hoped that by doing so I'd finally find the impetus to finish a novel.

That's when I created the idea for Colin McCool. The book was going to be about Irish mythology, the fae, magic, druids, and so on, and I thought, "Damn, this is kind of original and no one is doing it right now." Then, Del Rey released the first Iron Druid novel, and my hopes for releasing this totally original story sank once I read that book (incidentally, Kevin Hearne did damned fine job with that series).

Still, the characters were compelling enough to make me want to write them anyway, so I wrote the book as a YA novel. Unfortunately, I really didn't like writing YA, simply because I felt it limited me to tamer stories and subject matter. I did finish that first book (recently revised and re-released as "Druid Blood") but I never wrote any sequels because I didn't feel like I could tell the story the way I wanted.

Instead, I wrote a paranormal zombie apocalypse series (which is still ongoing), and had a heck of a lot of fun writing in the zompoc genre. I could make those books as bloody and gory as I wanted, which was whole lot more fun than writing a goodie two-shoes story in the hopes it would be acceptable to parents and educators. Nothing against YA; I certainly love a good YA novel, but it just wasn't my thing.

However, when I was writing the third Scratch Sullivan book, Colin sort of showed up in the story as a supporting character. And, I found he was much more fun to write as an adult than as a teen. Reader feedback on his character was quite positive, so I decided to resurrect my original idea and write a new adult urban fantasy series featuring Colin McCool. Thus, Junkyard Druid was born.

• How did you come up with the title?
Honestly, I was thinking about urban settings that hadn't been done a lot in urban fantasy novels, and I recalled how much I enjoyed reading about The Great and Powerful Turtle in the Wild Cards universe. George R.R. Martin did a fantastic job of bringing that character to life, but one of the coolest things about him was that whole junkyard secret lair thing he had going on. He flipped the whole billionaire vigilante superhero trope and it made the character that much cooler because of it.

Similarly, I thought a junkyard would make an interesting setting for a druid, since most people think of druids in the Dungeons & Dragons sense; attuned with nature, practicing nature magic, and that sort of thing. That's totally not historically accurate, but it's a modern mythology that most people associate with druidry. So I thought, "Why not put this character in a junkyard, and turn the druid thing on its head." And that's what I did. After that, the title came naturally from the concept.

• What do you want to say to your readers?
For starters, thanks to all of you who have supported me thus far. To everyone who has reviewed one of my books, downloaded it, shared it with friends, or purchased one of my books on Amazon, thanks so much for your support.

Also, a lot of my readers are fans of the Scratch Sullivan books, and I just want to assure them that I haven't abandoned that character and series. I'll be returning to that series very soon, and probably with a standalone tie-in story featuring Bobby, who is everyone's favorite werewolf.

Finally, I should mention that I'm writing two more Colin McCool novels in the fall of 2016, and based on the response I get I'll likely write more of them in 2017. So, stay tuned for more from Colin McCool.