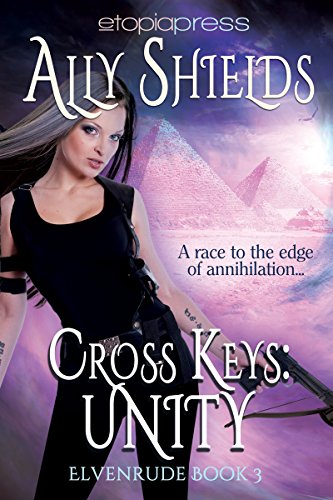 about this book: The final urban fantasy novel in the Elvenrude Trilogy ties together the themes and characters introduced in books one and two and culminates in a struggle not only for survival but for the heart and soul of their race.

Elite dark elves Kameo and Seth live and work in New Orleans at the far end of an elven portal. As the winter solstice approaches, they're focused on their engagement celebration...until a rebellion of Elvenrude's crossbreed class threats war at home, and decaying magic dooms the sister world of the moon elves.

When a moon elf previously thought dead is captured by Mexican police and ancient relics are stolen by invisible thieves, they realize escaped killer Jermon Lormarc and a rogue band of moon elves are still alive and plotting the downfall of one or both kingdoms.

While Kam's sister and Seth's brother attempt to contain the rebellion at home, Kam, Seth, and moon elf Prince Trystan hunt for the fugitives. During a perilous chase across the world, from the National Mall in Washington to earth's tropical islands and the sands of Egypt, they uncover a deadly plot, an unacceptable risk, that could end...everything.

This novel is intended for adult and older teen readers. It contains no graphic sex.