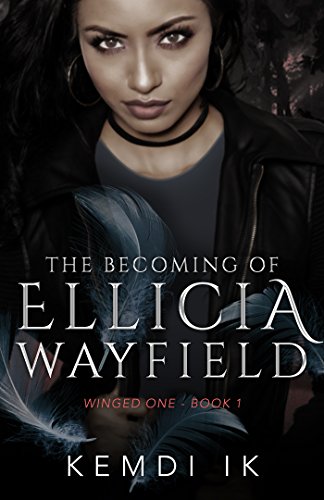 about this book: Seventeen-year-old Ellicia, still slightly traumatized by her father's death, takes moving to a new town with her stepmother head-on. If her dad had spent most of his life in this little, unknown town known as Alleyhill, then it can't be half-bad, can it?

Unfortunately, inescapable nightmares, weird occurrences, creatures with fangs, and talk of Ellicia being the Protector of the hell gates lead her to her answer: Yes, it can be that bad. Not ready to accept this new fate of hers, she opts for denial, but denial can only do so much because Nathan, the boy who attempts to befriend her almost as soon as she walks into Alleyhill High, is... strange, to say the least. He also possesses a pair of blue wings, so there's that.

It would seem as though Alleyhill is anything but a 'normal' town.

-This is the story of a girl--a teenage girl--finding her true self despite obstacles in this strange town. So, the story consists of both high-school issues and issues of the otherworldly category. Oh, Alleyhill... A town filled with vampires, ghosts, demons, and more. Trust me, Alleyhill is like no other.

-The writing process spanned over ten months before I took the leap and decided for it to be read by a larger audience.

-I would say that the title is pretty self-explanatory. "The Becoming" follows Ellicia as she struggles with what she's expected to do and who and who she's expected to be. She tries to find her true self in the midst of all that's happening.