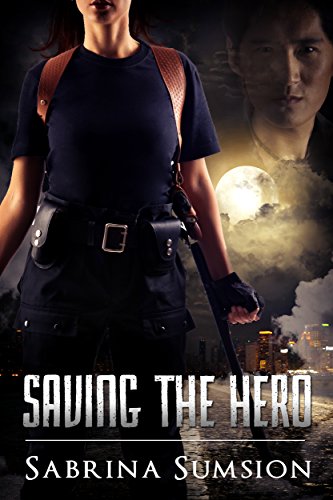 about this book: When the idea for Saving the Hero fluttered into my brain, of course vampires were hot. The problem with vampires and why I don't find them scary is because I don't believe that someone can steal your soul and turn you into a monster just by a bite. However, it was about that time I read an article about toxoplasma gondii which is a parasitic protozoan that can be spread by cats. The article I read explained the possibility that exposure to that microorganism could cause changes in behavior.

As I pondered what I had just read, I started thinking about how exposure to organisms could change the human body chemically. What changes would that make in personality and cravings? Eventually, I stumbled into what if vampiric behaviors were caused by a parasite? What if becoming a vampire was part psychosis and part invasion? What if the parasite killed its host if it didn't have fresh human blood with a separate DNA structure than the host? What if it tricked the body so the antibodies didn't attack it? What if a vaccination was possible if someone's body did fight it off?

Eventually, a story grew out of my brain storming. Kassy, a young, jaded woman trying to carry on her uncle's legacy. Mike, a veteran trying to find a place in the world again. Both trying to save an little girl's life.