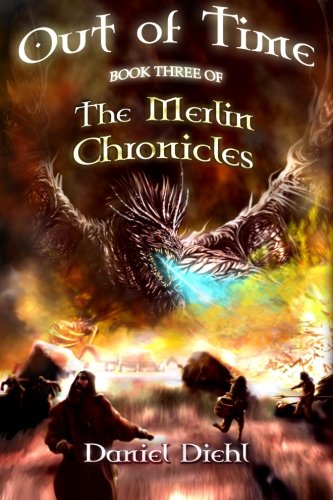 Book: Out of Time (The Merlin Chronicles Book 3) by Daniel Diehl

about this book: 'Out of Time' is the third and final instalment in the Merlin Chronicles trilogy following 'Revelations' and 'The Sorcerer's Apprentice'. In this ultimate instalment of Merlin's adventures in the 21st century, the wily wizard struggles to discover the secret of the time portals which will allow him to take his 21st century compatriots, Jason Carpenter and Beverly McCullough back in time to help him rescue his friend King Arthur from an untimely death in battle and save the kingdom of the Britons from the invading Saxon hordes and Morgana LeFay's army of demonic dragons. Between being quite literally thrown out of Hell, dealing with the magical, time-shifting tower inhabited by his friend Vivian, the Lady of the Lake, preparing Arthur's army to face an invading army which is about to overrun Arthur's kingdom and renewing his age-old battle with Morgana LeFay this is Merlin's greatest challenge in his 1,600 year-long life - and he is loving every minute of it. As culminations go this is one of the most stunning and unexpected conclusions to any fantasy trilogy ever written.