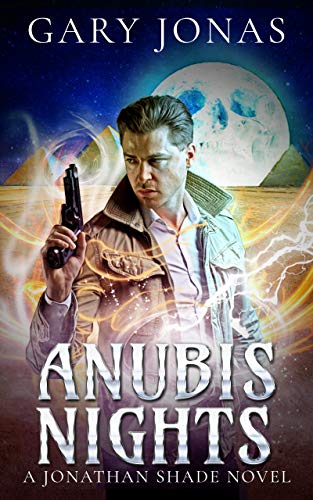 about this book: Anubis Nights is the fourth Jonathan Shade Urban Fantasy Adventure. This one is a departure because it's the first in a three-volume time travel sequence. Once again, I had to employ multiple viewpoints to tell the story, but it's worth it for the wild ride.

The story: A dead wizard named Henry Winslow steals a spell from the Forbidden Texts, divides himself into three avatars and escapes into the past on a quest for immortality. He needs the Emerald Tablets of Thoth, so one aspect goes to ancient Egypt to retrieve the tablets from the Great Pyramid at Giza. The next aspect goes to 1877, and the final aspect goes to the 1920s.

Jonathan and his team are sent into the past to stop Winslow. Jonathan and Kelly go to ancient Egypt, where they are mistaken for gods. They arrive during the reign of King Tutankhamun, but the boy king is murdered during a chariot race, and Jonathan is caught in the middle of royal intrigue.

Brand and Esther are sent to 1877 to locate the second aspect, but Brand runs into problems of his own.

Rayna is sent to New York City in 1926 to find the third aspect, but finds herself dealing with a murderer.

The stakes are high, and the action takes place across history.

This was the most complicated book I'd ever written. I did massive amounts of research on ancient Egypt, of course, but I also had to research the other time periods up front, too. It was quite the challenge, and I loved every minute of it. I hope you enjoy the wild ride.