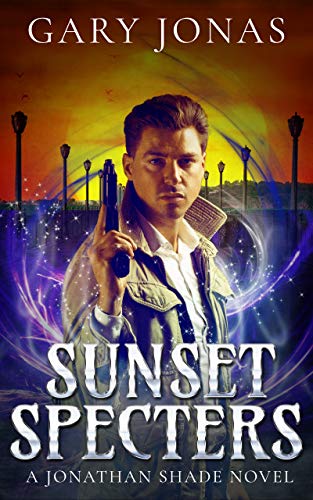 about this book: Sunset Specters is the fifth Jonathan Shade urban fantasy adventure, and it's also part two of the three-volume time travel sequence.

Jonathan and Kelly arrive in 1877, and head to the Barbary Coast in San Francisco to find and kill Henry Winslow. There, they meet a wild array of characters from history. The Barbary Coast is a tough place. They cross paths with a Chinese tong gang, crimps, prostitutes, thieves, killers, magic and the supernatural.

With this one, I limited the viewpoint characters. There are two scenes from the POV of a character named Douglas Freeman, but the rest is all Jonathan. Readers preferred the first person limited, so I adjusted the story. To be honest, it made the book a lot easier to write. I had a great time weaving in some of the actual colorful characters who resided in the Barbary Coast at that point in history.

However, my big goal here was to go deeper into Esther and Jonathan's relationship.

Writing multiple books in a series, an author has a few choices. The characters can basically remain static so they're the same at the end of the book as they are at the beginning. TV tie-in books are always this way, and you'll find that many bestselling authors employ this method as well. There are benefits to that because everyone knows who the characters are. The other choice is to have the characters grow and change over the course of a series based on the things that happen to them. Naturally, this is a bigger challenge. I went for the latter, of course. I like changing things up.