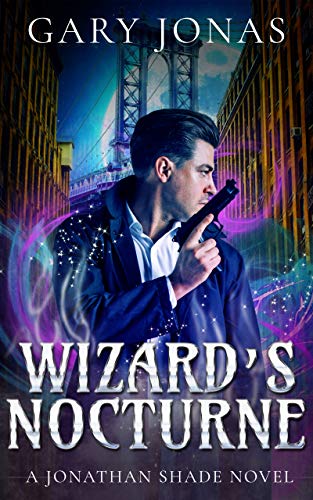 about this book: Wizard's Nocturne is the sixth Jonathan Shade urban fantasy adventure, and it's the third and concluding book in the three-volume time travel sequence.

If you've come along for the ride this far, you already know Jonathan was in a tight spot when we last saw him. If you haven't read the other volumes of the time travel sequence, I recommend reading those before this one. All right, this one takes place in New York City in the 1920s. Jonathan tries a different tactic in the quest to stop Henry Winslow, but due to the nature of layered time, he's got a lot more to deal with than he expects.

For one, Esther is not a ghost here. She's a living, breathing woman. For another, his plan to handle Winslow goes south. Add to that a bigger problem because a different version of Jonathan Shade shows up to kill Winslow. Jonathan, meet Jonathan.

I could go on for hours about the writing of this book, but I won't. Because I went back to the singular first person narrative, I had to change some of what I originally planned. At first I worried I might be losing something, but instead, while it was quite a challenge, I found that the new wrinkles gave the book a better voice. This was also a point where I could have decided to end the series or kickstart it into another groove. I opted for the latter, of course. Hey, I may be crazy, but I'm not a fool. I keep getting notes from people saying how much they're enjoying the books so I need to keep writing them. And as long as I'm enjoying the ride, I'll keep them coming.

A note to my readers: You rock! I hope you enjoy the conclusion of this sequence.