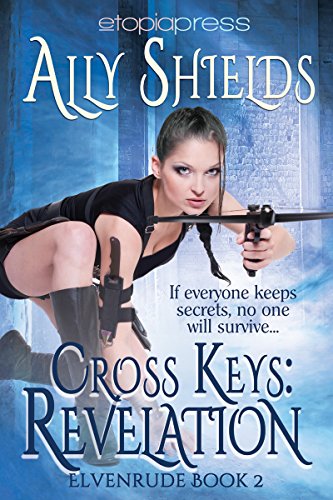 about this book: Cross Keys: Revelation is the second book in the Elvenrude trilogy and follows the events in Cross Keys (An Elvenrude Novel) by six months. It picks up on the adventures of Kameo Ryndel and Seth Lormarc, dark elves who have come through a magic portal and spend most of their time in the human city of New Orleans.

In spite of the strong attraction between them, Seth and Kam have begun to go their own ways. She's been helping CIA agent Noah Crain with covert missions using her elven magic, and Seth has been forced to take over more of the trade business since the arrest and imprisonment of his uncle.

Then a threat rises from the Louisiana bayou, and Kam is kidnapped by an invisible foe. She finally realizes nothing is more important than getting back to Seth, and he abandons the business to find her. It won't be easy...there are secrets--terrible secrets--still unknown.

Cross Keys: Unity, the final book in the trilogy, is currently a work in progress. With any luck, it should be available in early 2016.

NOTE: It took nearly a year to write book two, partly because I realized I didn't know these characters as well as I should. I'd spent more time on world building and not enough on characterization. After I did a first draft of Revelation, I went back and rewrote/revised Cross Keys book one (updated at all booksellers August 2015) and then revised and finished book two. It was a mistake I won't make again. :)