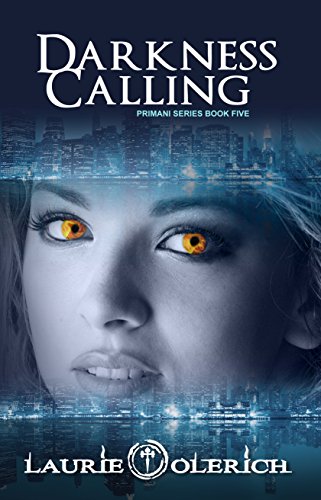 about this book: Book Five in the Primani Series. This darkly intense story is a standalone in the urban fantasy romance series.

Darkness Calling stars two of my favorite Primani characters, Sean and Aisling. I've beaten poor Sean to death in every book so it's time for him to get his happy ending. Aisling's immortal life has been just a horrible as her human one. My greatest challenge was taking her unlikable character and making readers root for her in this book. It was my personal mission and I think I've hit the right mark of strength and vulnerability. Primani fans will fall in love with her as much as they did with Mica and Rori. Another exciting twist in this book is the demon's point of view. This is the first book in the series where I've made one of my demons a main character. Cain/Irku is delicious as the antagonist who keeps our heroine on a short leash. Read on for the short blurb!

Finally freed from a century in purgatory, former-wild child Aisling just wants to raise her son and live as a normal human again. Her demon hunting days are over. Her taste of freedom is cut short the moment her past comes searching for her. There's a reason she was exiled, and his name is Cain. He is the one demon she couldn't kill. One she couldn't resist, didn't resist. With him, there was only darkness, and the angels help her, she liked it that way. Now he's back to keep her on a short leash. His commands are simple. Stay away from Sean or else. But when he threatens to take her son, she turns to the one man who can save them both. Sean.

Primani Sean is sick and tired of his baby mama's hateful attitude. He's been more than fair for five years. Her mood swings give him whiplash, and he's seriously thinking of strangling her. But when a brutal old enemy shows up to destroy everyone Sean loves, he discovers Aisling is hiding more than her feelings for him. When the ice finally thaws, he's stunned to realize how she calls to the darkness within him.

Joining forces to protect their son, Sean and Aisling set out on a journey that leads them from the city streets of Manhattan to the elegant hotels of Vienna to the final terrifying showdown in Rome.