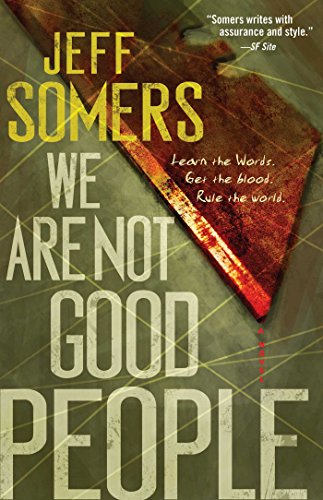 Book: We Are Not Good People (Ustari Cycle) by Jeff Somers

about this book: Learn the words. Get the blood. Rule the world.

This is a dark, bloody, incredibly rich story of blood magic and apocalyptic events from the author of The Avery Cates series of science-fiction noir novels.

Magicians are among us, hidden, secretive, and acting in their own interests. Most people are completely unaware of their existence – and if they do become aware it's usually moments before they are killed as part of the ritualistic casting of a spell, or simply caused to forget what they've witnessed. Because magicians aren't nice people. They're not moral people. They're not good people.

Magic can be wielded by anyone who learns the ancient language of power (known colloquially among magicians simply as The Words) and who is willing to shed blood to fuel the spell – their own or somebody else's. The language and its use is handed down strictly from Master to Apprentice and kept away from outsiders. Those who have learned its basics are known as ustari. Since the scope and power of a spell is largely determined by the amount of blood being shed, most magicians choose to bleed others for their spells. With major rituals requiring thousands or even millions of victims to cast, the most powerful magicians, called enustari, or archmage, have been the secret hand behind many of history's worst disasters, terrorist strikes, even entire wars as they seek fresh sacrifices for their spells.

• "An action-filled urban fantasy that offers absorbing storytelling in a gritty atmosphere of crime and a merciless, often ugly, magic built on violence." — Kirkus Reviews

• "if you like your fiction dark and your magic gritty and bloody, this is where it's at. This is a flawless book" — My Bookish Ways