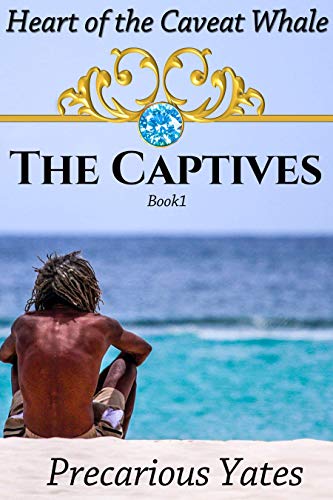 Book: The Captives (The Heart of the Caveat Whale Book 1) by Precarious Yates

about this book: The aquavians, those peaceful, webbed-fingered people who live in the oceans of Aiqua Marrin are suddenly violent. Only the MerKing could have turned them that way. It's up to an orphaned aquavian named Shunda to fulfill the prophesy and destroy the MerKing, but he'll need help from some land dwellers along the way.

Prince Mookori is determined to help Shunda, yet he must also capture corrupted aquavians to see if they'll be willing allies. Along the way he falls in love with Qoshonni, one of the MerKing's aquavians. She's the only one from that vast army who isn't wearing the barnacle armor. Can he trust her? Can Shunda trust her? Can she trust herself?

I wrote this underwater fantasy novel, the first of a trilogy, just after the Indian Ocean tsunami in 2004. Before I wrote the novel, and even while writing the first few chapters, I was absolutely terrified of the ocean. I studied sharks, coral reefs, tropical fish, dolphins, and myriads of other sea creatures all while terrified of the water. The more I wrote and studied, the more my fear subsided.

This book is for readers 8+.