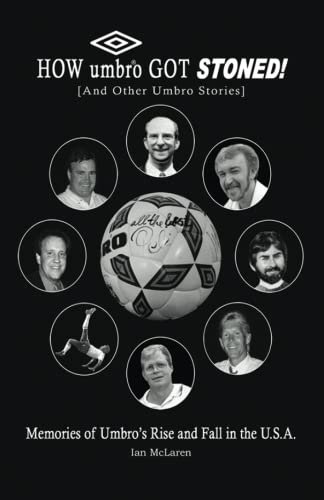 Book: How Umbro Got Stoned! by Ian McLaren

about this book: “We`ve lost Miss Brazil!” was the phone call from Buenos Aires.

Founder and former President of Umbro USA, Ian McLaren, tells the story of the evolution of the company from a Massachusetts garage in the early 1970s. The book focuses on a number of the humorous events during the early and explosive growth years as Umbro became the #1 brand in the US for soccer wear both on and off the field. (73)

Who remembers Umbro shorts, or “Umbros” as they became known, and then banned in many schools!
Ian recounts some of memorable moments during those years which ranged from being told by the elderly corporate Chairman to “go poison them pigeons”, to a never-to-be-forgotten meeting with President Mandela, travelling the world with Umbro`s global ambassador Pelé, and at one point even losing Miss Brazil.

The story concludes with the consequences of Umbro`s acquisition by Stone Manufacturing Company which ultimately led to the demise of the business in the later 1990s.