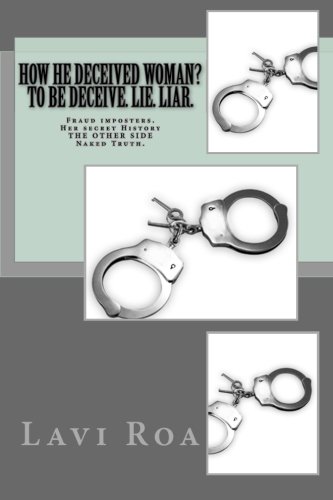 Book: How he deceived woman? To be deceive. Lie. Liar. - Fraud imposters. Her secret History THE OTHER SIDE Naked Truth. (Bulgarian Edition) by Lavi Roa

about this book: How he deceived woman? To be deceive. Lie. Liar.: Fraud imposters. Her secret History THE OTHER SIDE Naked Truth. (Bulgarian Edition)
Written by a real case.
Nelly was kidnapped. She was raped. She was only 16 years old.
How did she fell in jail? What happens? You will learn here, in this book.

I found one newspaper for dating, I put my own ad, and now I get letters. Look how many I got!
Marina pulled out of school backpack a bunch of letters.
The girls circled around her like chickens around a hen. Marina officially opened one of the letters and began to read of it:
, Hello,
My name is Ivan.
We have a large house. ...
I am financial satisfied, but I haven't a girlfriend. This is what I have not. This is what I miss.
I am 185 tall, weighing 85 kg, 28 years old I am with brown hair and brown eyes ...
Write me!
I'd love to see you.
Kisses!
Ivan"
All laughed.
Marina pulled a letter after letter, and read them, everyone listen, all girls discussed the letters, and then laughing.
- Hey, girls do you want you to answered to them? I can't write with all. I have no time. My mother has hired a mailbox in Central Mail service, she need box for its work, but that's o'kay, if you receive letters there. You can answered to this men, and write number of this mailbox, they will sent there his letters, so nobody will know your address, and in your home will nobody know, that you write with someone at all.
- Well .. well.
- Okay, I'll have some fun.
- Good, we will bring our mails here, at school, to laugh.
..
The Letters arrive.
The girls wore them in class, to read them and laughing.
After several months. Most of girls ceased to write. There were many tests in class, was no time for these baloney.
The girls were 16 years old, so they go out at discos. They have a real boyfriend, had not been up to writing letters to a bunch of clumsy jerks, who have no girlfriend.
Nelly like all, goes to school, then in home, ate, she must learn her lessons, she must be ready, to be prepared for next day. She stopped writing letters, have no time for this stupid things. Came awhile envelopes, but when there is no response and men stopped writing.
Parents Nelly had their own business, which currently do not goes well.
In Bulgaria there was a big financial crisis.
Bulgaria had just become a democratic country. The laws were written now.
All was such a blur and lack of money. Later from this fog came out very glossy rich people, but overall very people become more and more impoverished.
- I want to go to the disco, please daddy, give to me two Levs!
- I have no, no money for bread, your mom shopping with coupons. We have taken a loan from Aunt Valya. How and when will return them, I not know. We have no money.
It was very heavily. Nelly felt bad. From school, at home. A home is constantly arguing about money.
-Dad, I want to go out tonight, with the girls on disco.
-You will not going anywhere.
-I want, I do not going anywhere.
-Do you hear what I'm saying! You will stay at home!
- Will go.
-Do you hear what I'm saying!
-I will.
Nellie's father hit her. She screamed. He knocked on the floor and started kicking her with legs. He kicks her everywhere.
Nelly crouched. Her body looks like a ball on a floor. Her father Dragan was suddenly startled and stopped. He Stopped beat her.
Nelly hid in her room with sobbing.
Never before had hit her.
The days passed.
The family business not going well.
The Nelly's family From day to day began to sank more and more in debts.
With Dragan - her father, no one could no longer speak normally. He only cursed. If someone ask him something he, hit him. Dragan began to beat everyone.
Such scenes of domestic violence were no longer rare, it was everyday life.
Every day when Nelly wake up, she go to school, then at home she closed in her room.
Anton, was one of this men with whom she was writing before, and he had not stopped writing to her letters. Nelly no one answered. But until she was writing still letters, she had given to him her home phone numbe