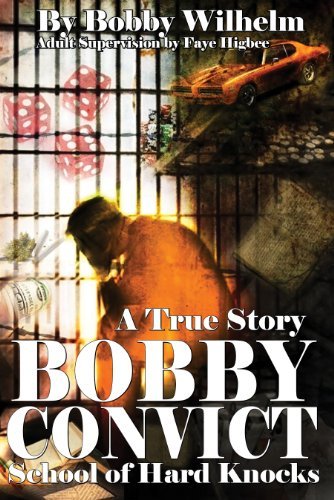 about this book: Ask yourself- would you take on book project with a former drug kingpin if you were a former law enforcement employee? No? I did. And I had a blast- interviewing police officers and criminals alike. For those who love to read about true crime, enjoy an entertaining read, or those who have family members trapped in drug addiction, this book is filled with hope. Career criminals can change! The more I interviewed the people in Bobby Wilhelm's life, the more convinced I became that he will make it. While apprehensive at first, I realized that he told me the truth about his life. He was crazy, smart, and at one time dangerous. Some of his "friends" were once exceedingly evil- but with his reputation behind me, they willingly gave me information about his lifestyle.

I completed 97 interviews and countless hours of research for the book- weeks and hours spent on the internet, searching for corrobration, photos, and insight. I found addresses of former associates, looked up photos from local museums and articles from local newspapers (spent days and hours in front of microfiche machines and down in the basement of newspaper morgues). It hurt my neck. :) It took two full years to write it- 6 months of pre-interviews, 18 months of working with Bobby on the writing of his life. A former police person working with a former drug dealer with ADHD- that was NOT easy. Like herding cats, as they say. We finished in Nov of 2012 and published it with "secret" UV messages hidden amidst the text in the print version. My first attempt at a nonfiction crime book was more exciting than I realized, more fun than I'd hoped.

As to this man's former lifestyle, judgment will not help him. The more people who can see the grief in his heart over his past, the better hope there will be for the future of any person trapped in addictions or the criminal life.

Here are my thoughts on the book Bobby Convict...The book got me thinking a lot more than I thought it would. Kind of like a Go ask Alice type story, but from the other side, which not very often do we hear about. It made me think how our egos really do rule as I felt all the way through that he was so driven by it and yet how vulnerable he was as well. His thrill I believe (only he knows) came not so much from the drugs themselves, but in being the best at it and the excitement of alluding the law. The part on Satan's train bothered me a lot and also is the harsh reality. It made me realize that it doesn't matter who you are or what kind of life you live, we are all vulnerable to it taking control of us, even the dealers. He also doesn't go on a rant about coming clean because he found God (some may not like me saying that)but I think too often the phrase is used to easily. When we are the ones who do what we need to do. He doesn't look for sympathy and is very candid about all he lost and missed out on because of it. What greater price to pay than never knowing a child and missing out so much on another. Along with missing out on so much time with sisters. I do not know this man other than what I see on face book. What I do see is not a hard and bitter angry man. What I do see is someone who people like. All pictures he is smiling. A man who genuinely cares for other people. Oh yea I think ego is still there and a drive to be the best, and a need conquer so to speak and move on to something else. What I see him conquering these days though- motorcycles, his love for old cars, and lawn art and am sure there is an occasional woman in there too! haha. I really do recommend this book! It truly does open your mind. [by Karen Ulen]