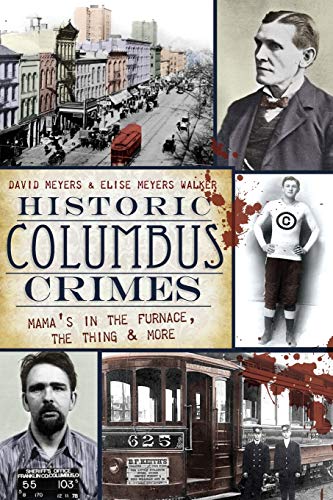 Book: Historic Columbus Crimes - Mama's in the Furnace, the Thing and More by David Meyers

about this book: "David Meyers and his daughter Elise Meyers Walker have written one of the most entertaining books about local crime that I've ever read. HISTORIC COLUMBUS CRIMES - MAMA'S IN THE FURNACE, THE THING AND MORE is sixteen gut wrenching chapters of horrible crimes that have occurred in the capital of the great state of Ohio, Columbus." So says David A. Kulcyk, the award-winning author of Death In California. "A lot of things come to mind when describing Columbus," April Bohnert wrote in U Weekly (02/02/2011). "Yet of all the descriptions one may use, the home to historic serial killers, grave robbers and axe murderers is usually not in the mix."

In their follow up to CENTRAL OHIO'S HISTORIC PRISONS, the authors have once again turned their attention to true crime in this selection of tales from the city's dark past. There's a rock star slain by a troubled fan and a drag queen slashed to death by a would-be ninja. There's also a writer who died acting out the plot of his next book, the minister's wife incinerated in the parsonage furnace, and a couple of serial killers who outdid the Son of Sam. Throw in a gunfight in front of the state capital, grave-robbing medical students, the bloodiest day in FBI History, and other fascinating stories of murder, mayhem, and madness and you have a book you won't be able to put down!