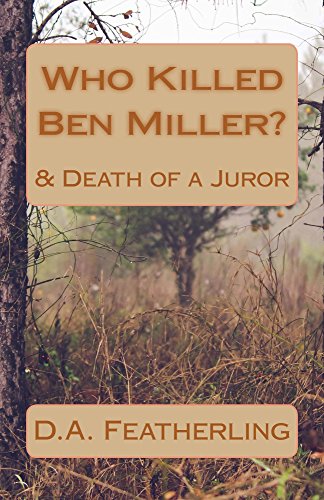 Book: Who Killed Ben Miller? & Death of a Juror by D. A. Featherling

about this book: September, 1930…on a lonely country road, a young farmer is stopped on his way home at midnight. A few minutes later, a shot rings out and his life is ripped away.

Thus began the mystery of "Who Killed Ben Miller?" The true crime cold case was never solved. No one locally was ever interviewed. The case was effectively squelched.

What were the reasons for the unsolved murder? Who was the guilty party? Author D. A. Featherling undertook almost a year of research and the assistance of several other individuals to come up facts concluding with the identity of the killer.

In a companion piece in the same book, Featherling explores the "Death of a Juror." A young man is called to serve on a murder trial in 1931. A trial that's already been moved 5 times. He's suddenly "taken sick" during the early testimony, thereby causing a mistrial, and later dies under mysterious circumstances. This true story also explores what may have happened as it was uncovered by the research team.

Enjoy two true stories as two little-known events in the history of small town Georgetown, Texas are examined. This non-fiction book has all the twists and turns of mystery fiction, but the story is true.

Other books by D. A. Featherling (more)