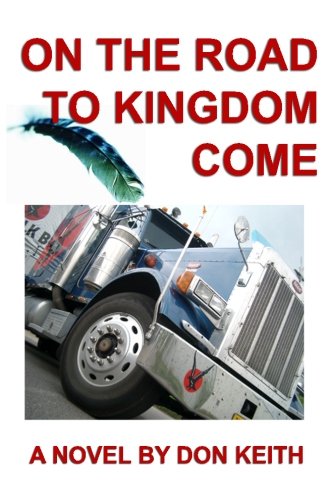 Book: On the Road to Kingdom Come by Don Keith

about this book: I read a book years ago by an author named William Least-Heat Moon, a Cherokee Indian. He took his old beat-up van and retraced the infamous Trail of Tears and wrote a stirring account. Ever since, I have wanted to do a book that dealt with the Cherokee culture. I've also had a fascination with another "tribe," the over-the-road truck driver, and their own unique "culture."

Then, in the middle of the night (as they so often do), an idea came to me. An idea about a Cherokee who just happened to be a long-haul truck driver. That was how Joe Proudfoot became a character and this novel was born. In addition to an internal struggle over his heritage, Joe also has troubles at home. His non-Indian wife is tired of him going silent on her, retreating into the stoicism he believes is the way his culture should deal with such things. When she leaves him, he is--as usual--on the road somewhere, hauling freight. Now he must hurry home to try to settle things before it is too late.

However, there are strange events and sinister detours all along the way. Only late in the journey does Joe realize that all those "ghosts," amazing coincidences, and dangerous encounters are all related. And they are driving him toward a rendezvous he could never have imagined.

At the same time, Joe's wife, Marie, is on the road as well, with their son, not sure where she is going. Then she, too, realizes some invisible hand is pointing the way. And that she is following in reverse the Trail of Tears.