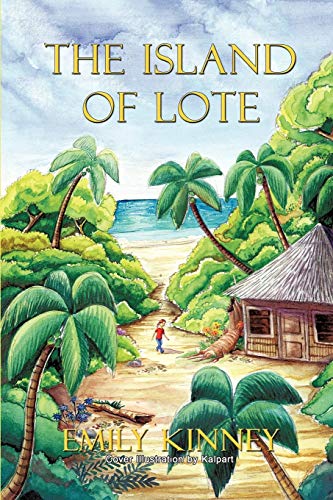 Book: The Island of Lote by Emily Kinney

about this book: This book is about a sassy, unusual, fourteen-year-old girl named Milo Hestler. She has spent most of her life moving around with her parents, and doesn't have any friends, except for her conscience, Bob the Conscience. The last place they move to is particularly bad, and Milo is dying for some peace and quiet, so she decided to go to Australia for Summer Camp. Her plans are shattered, however, when she is forced to abandon the plane and parachute into the ocean. An injury to the head causes her to black out, but not before she sees that she's landed near an island. When she wakes up, there is sand beneath her, palm trees above her, and a very cute boy looming over her. The boy, whose name she learns is Simon, is the one who rescued her from drowning. He's attractive and friendly, but can't speak English. Therefore, when he asks her a very important question, she doesn't understand and says, Yes. Later on, after finding an interpreter, Milo learns that she said yes to a proposal, and she and Simon are now engaged. This information horrifies her, since she is a girl of high principles, and believes she is far too young to be tangled up in something like marriage, and furthermore, one should be in love when they get married. She isn't in love with Simon, who she just met a couple hours ago, is a complete stranger to her, and she can't even get to know him because they don't speak the same language. Panicked, Milo demands that the entire thing be called off, but is severely informed that her request is not possible. She learns that this island is governed by certain laws, which forbid any engagement being broken off once it is made. Milo is told she will go through with the marriage, even if she has to be forced. Her fury over this injustice turns into a smoldering hatred for her new fiancé, even though he obviously is very much in love with her. His love and her hatred collide and clash as they are forced to live together. With the help of a shockingly smart and caring six-year-old, new island friends, and Bob the Conscience, Milo learns that life lived in a bungalow isn't all that bad, and you can only fight against love so long before it inevitably wins.

• What inspired you to write this book?
I was fourteen when I wrote the first draft of this book. It was one of the most joyous experiences of my life, because there was so much creative freedom and discovery. The words simply flowed from my head, down my arm, through the pen, and onto the page. It was wonderful, exhilarating, and when I finished, I knew exactly what I wanted to do for the rest of my life. I had started books before this one, but none ever went anywhere. I lacked discipline and focus, which are key factors in writing books. Ever since I could form comprehensible thoughts, I had been coming up with stories in my head, usually just to entertain myself, but whenever I would attempt to put anything down on paper, it just never went anywhere. By the time eighth grade hit, I was ready and determined to hash out a complete novel. And I wanted to do it from scratch, instead of using one of the many, many ideas I had previously developed. So, with the help of a friend, I came up with a start to a plot, deciding I would build on it later. However, after I had penned the first one or two pages, I found that I couldn't remember what my basic idea had been. No matter how much I wracked my brain, I couldn't recall it. Frustrated, but resolved not to abandon the project, I decided to go in an entirely different direction. I don't remember exactly where the idea for an island came from, but I do know that I had just fallen deeply in love with hip-hop, and attitude was on my mind. I was thinking about how heroines turned victims to the overpowering affection of "jungle men" were so timid and fragile. They were both human, though their languages were different, so understanding each other was out of the question, but the intentions were still made well known through actions. Such as the man caressing the cheek of the woman and standing way too close. Generally, the woman's response to such advancements are embarrassment and fear, but always underlined with a sense of generosity and curiosity. It bugged me. Where were the girls with attitude? Where were the sassy ladies, whose main language was sarcasm? This concept intrigued me, and struck me as very funny. Lo and behold, Milo Hestler was born.

• Who are the primary readers for your book?
I'd say 12 and up. The young adults around the world, though the book reads well enough to be intriguing for adults, too. Maybe even some mature under-twelve's. It's just a whole lot of fun and laughs, so really anybody could read it and enjoy it if they wanted to.