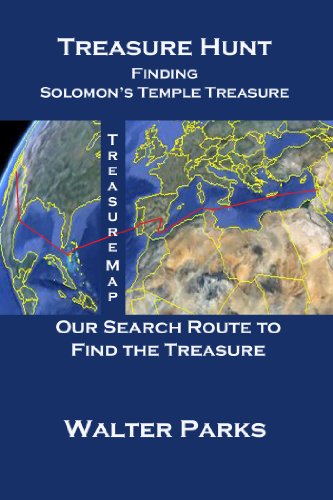 about this book: We found Solomon's Temple Treasure where it is currently hidden in a secret cave in a land where you could never have guessed.

The Temple Treasure was taken from the Second Temple in 69 AD, just before the Romans sacked Jerusalem and the Temple. The Treasure was split up and hidden in 64 different places in and around Jerusalem.

Those locations were documented on the Copper Scroll found with the Dead Sea Scrolls. The first of these scrolls were found by Bedouins in caves at Qumran in 1947. The Copper Scroll was later found in cave number 3 by professionals in 1952.

A search of the locations listed in the Copper Scroll revealed that the Treasure had been moved from the original 64 hiding places.

This book is the story of how we traced the Temple Treasure to its current location and of the mixed, perhaps illegal plans to retrieve it.

The current value of the Temple Treasure is well over a billion dollars; our efforts to find and retrieve it were therefore a worthy treasure hunt.

I became interested in Solomon's Temple Treasure when I was approached by a Federal Inmate to arrange financing for an expedition to bring the Temple Treasure from its remote hiding place to the United States.

He contacted me because I was making films at Universal Studios and he thought it would make a good movie. He hoped that the film project could generate enough money to fund the expedition.

He reasoned that he could not go to any authorities less the Treasure would be taken from him; after all he was in prison and had been ordered to pay millions of dollars of restitution. He was also under suspicion for additional crimes for which he had not yet been charged.

He believed at the time of our first meeting that his appeal would result in his release within about a year. He feared however that he may later be tried and sent back to prison for his additional, yet uncharged crimes.

He was also concerned about questions as to who owned the Treasure. Would it be the Israelis? Would it be the country in which the treasure is found? Would it take forever for him to get any part of its value for himself?

These concerns coupled with his fear that he would surely go back to prison because of the earlier crimes for which he was suspected motivated him to develop a plan. The first element of the plan was the need to get the Treasure safely placed in the hands of a separate party.

His ideas were to then have his attorney make a "deal" with the Feds to void all current and suspected crimes against him and give him a generous "finder's fee" for turning the Treasure over to them. The Feds would then work with the Israelis as necessary to have this great historical and economical Treasure returned to them.

Return of this Treasure would surely result in the building of the Third Temple. He reasoned that the Feds should view this as a viable plan that would return this great Treasure to mankind for the simple "price" of one man's freedom.

This is the story of what happened and where Solomon's Temple Treasure is today.