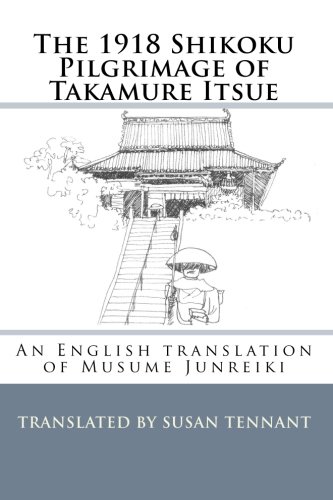 Book: The 1918 Shikoku Pilgrimage of Takamure Itsue - An English translation of Musume Junreiki by Susan Tennant

about this book: It is said that 100,000 people make the Shikoku pilgrimage each year. Nowadays most pilgrims travel by bus and car and few people walk the 1400 km route which circles the island of Shikoku and takes pilgrims to 88 Buddhist temples. I taught English on Shikoku for five years and during my holidays I walked or cycled the pilgrimage route. It was a moving experience being amongst the pilgrims dressed in traditional white jackets and pants, chanting and ringing bells. Their faith in Kobo Daishi, the founder of the Shingon school of Buddhism was what brought most of them to the pilgrimage. They believed that he was travelling with them and that he could grant them their wishes, whether they wished for health, happiness, success, or a peaceful death. Pilgrims receive gifts of money, food, and various necessities from the residents of Shikoku and other pilgrims as they make the pilgrimage. I also received many such gifts when I was on the pilgrimage.

I was fascinated by the pilgrimage and longed to be able to translate a well-known pilgrimage account written by Takamure Itsue, a young woman of 24 who made the pilgrimage in 1918. Takamure wrote 105 newspaper articles about her experiences and those articles made her famous throughout Japan. Later, Takamure became famous for other reasons: as the first historian of Japanese women, as a poet, feminist, anarchist, intellectual, scholar, as an abused wife who ran away, and as a woman whose husband served her in all her scholarly endeavours. She set out from Kumamoto to make the pilgrimage alone but before she reached Shikoku an old man of 73 insisted that he travel with her to protect her because he believed that she was a manifestation of Kannon Bosatsu, a Buddhist god. Some people she met on the pilgrimage even asked her to cure them of their diseases.

Her pilgrimage account is full of her complaints; about the old man's ignorance, about the heat and the difficult route, about the other pilgrims and the reader often longs to tell her to stop whining. Her descriptions of the other pilgrims are fascinating—there's a quack doctor, a nun who is mentally deficient, a girl with oozing scabs on her head, and so on. It took Takamure five months to make the pilgrimage and she was changed by her experiences. Later in life she wanted to make the pilgrimage again but never did.

I translated the book because I wanted non-Japanese to be able to read it because I think it is such a great story. If you like reading Isabella Bird's travel books, you'll like this book. If you enjoyed reading Alexandra David Neel's Journey to Lhasa, you'll enjoy this book. For those who are interested in Japan or Buddhism or feminism or early 20th century life, this will be a book you will find interesting. Check out reviews by the Japan Times, the Journal of Buddhist Ethics, Tricycle, Magistra, Muryoku, Studies in Travel Writing and Amazon.