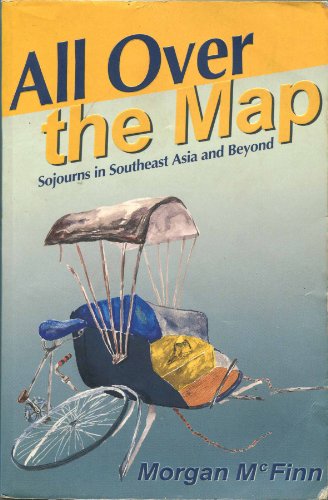 Book: All Over the Map by Morgan McFinn

about this book: 'All Over the Map' is something of a sequel to 'Out of the Loop'. It chronicles the occasions when McFinn relinquishes his hammock along the glorious shores of Koh Samui and sets off to visit other exotic destinations…the holy island of Patmos in Greece, Kerala in southwest India, Morocco and Phnom Penh, Cambodia. The chapter headings refer to hotels where he stays in the various locales.

The book is anchored in Phnom Penh where McFinn adopts a couple of families whom he first encounters living in a lean-to on the pavement
beside a garbage dump. He does what he can for them but, his altruistic efforts are not always successful. Still, he continues to try.

On Patmos he meets up with an old friend named Robert Lax who is considered by many as a holy hermit writing some rather odd verse. There are, of course, other engaging characters, as well. Lax introduces McFinn to a certain style of writing which he refers to as "A Roomful of Voices". It is simply fractured snippets of dialogue echoed from a group of people within a social setting. The reader may find these episodes challenging but, hopefully, amusing.

In Kerala, McFinn stays at the family owned Hotel Rockholm perched above boulders that front the magnificent Arabian Sea. In Morocco, he pens a fantasy entitled, 'Murder in Marrakesh'. There are also a couple of brief sojourns in Amsterdam and Paris. All in all, 'All Over the Map' is meant to be a frolicking good read.

A quote from the book: 'If you can't feel good about yourself and the world around you on a beautiful Spring day in Paris then, you are either gravely ill...or, you're French."