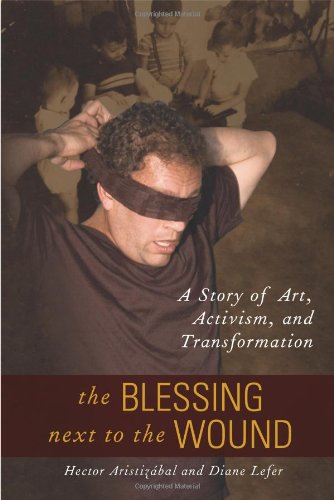 Book: The Blessing Next to the Wound - A Story of Art, Activism, and Transformation by Diane Lefer, Hector Aristizabal

about this book: After the photos emerged from the hellhole of Abu Ghraib, my friend Hector Aristizabal--himself a survivor of torture at the hands of the US-trained military in Colombia--went a bit post-traumatic. He's on the board of the Program for Torture Victims which was the first organization in the US to ever provide medical and psychological services to survivors. (Hey, PTV began giving free care to survivors more than 30 years ago, when the word "victim" was still more commonly used.) PTV usually offers some sort of program to commemorate the day the UN recognizes survivors. Hector, who is a theatre artist and psychologist, participated by improvising a few scenes based on his life. The audience was blown away, so he asked me to work with him and develop a real performance piece. When we began to tour the piece, Nightwind, around the US, Canada, and then the world (including for human rights groups in Colombia and Afghanistan), wherever we went, people asked if we had a book. So we finally got down to it and wrote one. The cover is taken from a performance.

The Blessing Next to the Wound isn't just about torture. It's about Hector's tumultuous life and how he turned away from thoughts of violence and revenge and instead worked at healing himself and offering the methods he hoped would also help others heal. We didn't envision this as a self-help book, but always hoped it would be helpful to anyone going through a difficult life passage--an ordeal.

Along the way, we get to tell about our work with immigrants, in detention centers, in the juvenile in/justice system and on behalf of the people in Colombia who still face horrific violence.

There's some difficult passages in the book, as in Hector's life, but it's ultimately affirming.