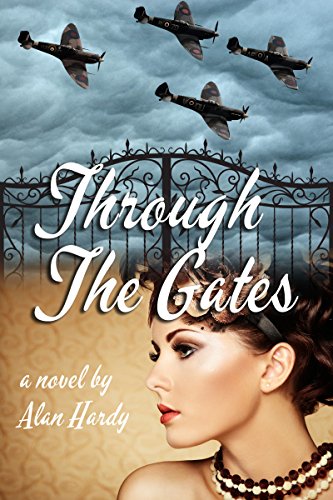 Book: Through The Gates by Alan Hardy

about this book: This is a totally original take on the currently fashionable genre of time-travel. I would say that, wouldn't I, you might think? Well, you see, this story is not just the usual sci-fi/fantasy nonsense about portals/shapeshifting/superhumans/whatever, but explores the theme of time-travelling from the perspective of a realistically-drawn central character, Mark Danberry. Mark has had mental problems in the past, is divorced from his wife (a few years older than him), and lives all alone in a big house with a mysterious past, and a vast garden where he keeps unearthing artefacts that also hint of the past. Add to this that he meets another older woman (something of a vamp) who knew him when he was a child, and that he is fascinated by World War Two and feels himself being drawn back more and more to that time... and there's something else... He remembers when at infant school a time when his class was addressed by a beautiful, black-haired woman, who spoke of the war, and anniversaries, and sacrifice, and things never to be forgotten, and who he has never been able to forget. Eventually he recalls her telling him they will meet again...and so he begins to journey back to World War Two with the hope of meeting and finding the people and the objects which will give him true identity and final peace...Oh, and another thing... it becomes clear gold bullion was hidden in the past in his garden, and only by travelling back in time will he be able to unearth it. Mark might be completely mad... Or is he? As he begins to travel back and back, he realizes he's beginning to disturb and unravel the folds and sleeves of time, and that it might be his destiny to change the course of history, and save the world from catastrophe...or condemn it to annihilation... So, it's not just a book based on time-travelling, or with a fair amount of love and sex (of which there is quite a lot, in fact), but a book about memory, loss, and life and death, and where an individual's identity is to be be found, or lost, amidst all that...