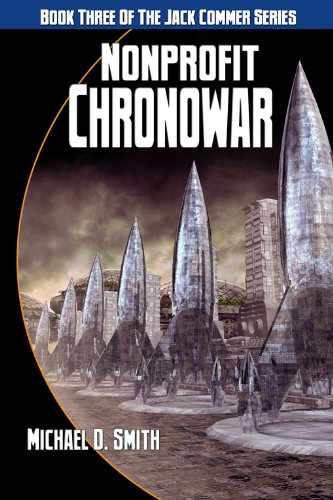 about this book: Joe Commer is a guilt-ridden space pilot from 2036 who finds himself time-traveling to 2020 to ruin the first conference of The Committee to End Suffering on Planet Earth with news of the destruction of the planet thirteen years in the future.

The third Jack Commer novel, Nonprofit Chronowar, came along somewhat by accident. I began planning a purely literary novel, originally titled Nonprofit Ladies, as a psychic collage of where I'd been over the past few years. I sifted ideas from disparate notes dating back over a decade, and mined folders of old writing, photos, newspaper and magazine articles I'd saved over the years--anything that attracted my attention. All this sorting took longer than it should have and the plot didn't jell until a dream of time travel intervened--and by then this novel was no longer literary fiction. In the dream, I opened some dull brochure and let my attention rest on a picture of a Houston school bus--the picture then became a hyperlink warping me and a coworker straight to that location and time from Dallas … here was a business opportunity, we realized–to create human transport hyperlinks … so why did he steal my car and abandon me in Austin?

In any case time travel became central to the novel. And somewhere during the idea sorting the Jack Commer science fiction series intruded, and I found myself exploring the traumas the main characters endured in the earlier novels, especially Joe, with his guilt about having pressed the button that destroyed the Earth in 2033. As I got into the novel, the problem of congruency to the earlier novels came up, and, finally considering the three manuscripts as a trilogy, I revised The Martian Marauders and Jack Commer, Supreme Commander, stabilizing the three novels with massive fact, character, and chronology files.

Ex-space pilot Joe's war guilt is central to the novel. Tormented by his role in dropping the superbomb that ended the Final War but rendered the Earth uninhabitable, the time-traveling Joe lectures the nonprofit ladies of 2020 about the coming Final War, the panicky evacuation of the remnants of humanity to Mars, and an unavoidable conflict with a psychotic Alpha Centaurian Empire. Meanwhile, in the audience, feckless young Urside Charmouth is horrified by the revelations from the future, fearing he's ruined the timeline with his own drug-like time travel experimentation. He and Joe soon realize they've been caught up in a time war which both Sol and Alpha Centauri know the Centaurians will lose seventeen years in the future--but which both sides have no choice but to fight out anyway.