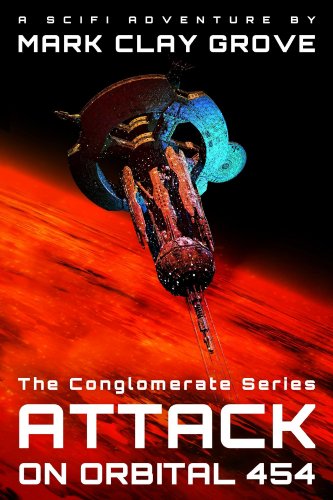 Book: Attack on Orbital 454 (The Conglomerate Series) by Mark Grove

about this book: This is a professionally edited, designed, and illustrated (cover) 80 page novella. It took me three months to write and another four to edit, re-edit, and bloody edit some more! One learns that tweaking never ends, doesn't one? Anyway, this title is actually a chapter title from my first book, "The Serapis Fraktur," which was met with considerable praise. What I have done in 454 is to expand the theme of that particular chapter because it is one of two or three that were action-packed in Serapis. Some people thought that I needed more action and less cutting edge hard and speculative science in my work. Alas! This is it. Ha!

And its synopsis is: Time travel extremists attempt to destroy Utopia by crashing an orbital city of 500,000 onto a Muslim planet. Only four officers from a detachment of Federal Marshals survive. How they recover from the devastation is the gist of the story, but they're not fictional characters. The four are real historical heroes extracted from the 1800s for their valor as the most famous Texas Rangers of all time.