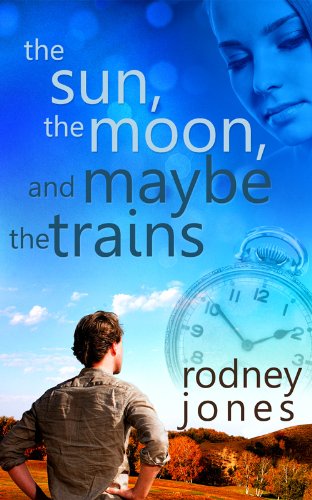 Book: The Sun, the Moon, and Maybe the Trains by Rodney Jones

about this book: Seventeen year old John Bartley lives in 1875, Greendale, Vermont with his Uncle Edwin, and Aunt Lil who run the local griss mill. John delivers flour and mill to the general store Rutland, owned by his friends, the Jacobsons. On his return home he stops on a mountain ridge to water his horses and discovers an unusual piece of ribbon tied to a tree branch. Little does he realize, he just stepped into the future and back out with the ribbon in hand.

On John's next trip to Rutland, he stops at the same spot where he'd found the ribbon. This time, however, he winds up lost in 2009. He ventures on foot into Wallingford where he meets the young, outspoken Tess McKinnon. Tess is at first convinced that John is either crazy or acting, but it's not long before the truth becomes apparent. Over the next couple days, Tess gives John a taste of 2009, and then helps him find his way home, but not before discovering the moss covered ruins of Greendale, all that remains of his home in her time.

John slips back into the routine of his 1875 life. His inability to shake Tess from his mind becomes a distraction, which lands him in a bit of trouble with his uncle. In an effort to get over her, John decides to pursue a courtship with Zella Shaw, a local girl he's had eyes for for a while. Unfortunately, the preacher's son, a boy who had always been a source of conflict for John, also has his eyes on Zella. Tensions rise between the two rivals.

John again is sent to make a delivery to Rutland. Upon his return home, he is greeted by his uncle's inquisition regarding a girl who's made her way across the mountain with a message for him. Tess had discovered the reason for Greendale's demise and risked everything to get word to him. But returning home to 2009 proves much more problematic than getting there was. Tipped off by John's rival, Hugh, the local sheriff, on a mission to find a runaway fitting Tess' description, shows up in Greendale and takes Tess into custody. Her innocence is soon established, but not before provoking the indignation of the sheriff.

The following night, she is back in Greendale. Winds from a hurricane blow into the village. Seeking vengeance, the sheriff shows up with a group of his supporters, which include Hugh Stewart and his father. The mill is set ablaze. An accident, perhaps. Tess escapes on foot up the mountain. John, after being detained, goes off in search of her. Along the way, he encounters the sheriff. A brief scuffle ensues. John manages to wrestle the pistol from the sheriff and scares him off. Farther up the mountain, John finds Tess' lifeless body with a bullet hole in it. Distraught, he hauls her up the mountain to the ribbon place, but as he attempts to take her home, she suddenly disappears. Alone, John hikes into Wallingford determined to pass the dreadful news onto Tess' mother, but as he approaches the front door of her house, Tess steps out. John quickly discovers that he'd traveled back to the day he first met her, months before she travels to his time.