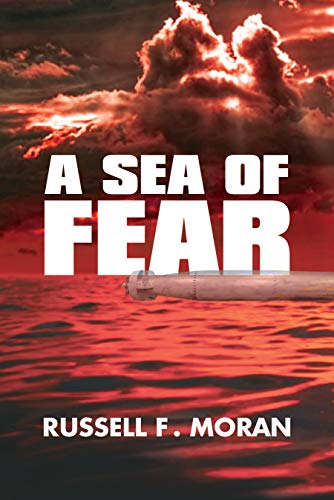 Book: A Sea of Fear - A Novel of Time Travel - Book 3 of the Harry and Meg Series by Russell F. Moran

Along with his Navy Commander wife, Meg, he leads a carrier strike group against the worst enemy the country has faced since World War II, a small nation that is intent on destroying the world's shipping industry. The seas of the world have become scenes of plunder, pillage, and mass murder.

The president has convinced Harry to come out of retirement and put an end to the looming crisis. He promotes him to Fleet Admiral, the highest-ranking officer since Admiral Chester Nimitz.

Harry and Meg were having a pleasant retirement, running a world-class resort that they bought in Rhode Island. But when the president pleads for him to "Give 'em Hell, Harry," he knows that he can't ignore his call to duty.

As people who have time traveled in the past, Harry and Meg come up with an idea to travel three years into the future. With President Blake's blessing, they lead a group of officers into the future. What they find is horrifying, an America taken over by a totalitarian dictator.

They return to the past and report their findings. President Blake, hearing their terrifying story, convinces Harry that he has an even bigger call to duty, the greatest challenge of his life. He takes on the challenge for one reason—Meg will be at his side.

As in the first two books of the Harry and Meg Series, The Maltese Incident and The Violent Sea, A Sea of Fear is a sweet romance between two of literature's most exciting and likable characters, Harry and Meg Fenton.

A Sea of Fear is a story of war, politics, time travel, and love.