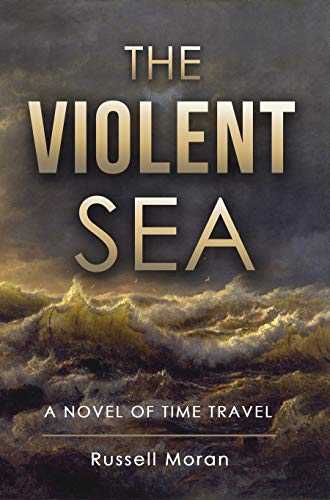 Book: The Violent Sea - A Novel of Time Travel (Book Two of the Harry and Meg Series) by Russell F. Moran

about this book: The Violent Sea is a novel of time travel and military history, the second in the Harry and Meg Series. It's also a sweet romance between Harry and his wife, Meg.

Rear Admiral Harry Fenton has done it again. He's traveled through time to a different era. He finds himself, with a serious head injury from a fall, at Pearl Harbor Base Hospital on May 16, 1942, three weeks before the Battle of Midway. His wife and aide, Lieutenant Meg Fenton, is worried sick, and waits for him—in 2018.

Admiral Harry is the commanding officer of Carrier Strike Group 14 in 2018, but the people in 1942 think he's a busted-up hallucinating sailor who imagines himself an admiral.

But after speaking to him at length, Spruance is amazed at Harry's knowledge of naval tactics and strategy. He calls Harry's bluff and orders him to stay aboard the Enterprise for her upcoming engagement at the Battle of Midway.

By the end of the battle, Spruance thinks of Harry Fenton as a friend, and even calls him "admiral."

Now Harry needs to figure out how to travel back to 2018, to his carrier command, but most importantly, to the love of his life, Lieutenant Meg.

After Harry returns to the present, the Fentons are deployed on Harry's flagship, the USS Gerald R. Ford. The ship encounters another wormhole, this one in the ocean. Again they are transported to the 1949 and participate in the Battle of Leyte Gulf.

The book took me 10 months to write. It went through 20 drafts and three rounds with my editors. I did copious research for the book to ensure its historical accuracy. If you enjoy the genre of time travel, I think you will love this book. I got to know my two main characters in the prequel, The Maltese Incident. Harry and Meg are deeply in love but enjoy constant banter and wisecracks. One of my favorite characters, Admiral Ashley Patterson of The Gray Ship, makes an important cameo appearance in The Violent Sea.

I'm a fan of surprise endings and The Violent Sea delivers. It's available on both Kindle and paperback.