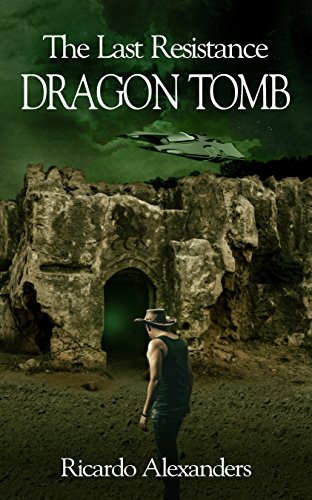 about this book: The Last Resistance: Dragon Tomb is a fantasy novel in which an alien invasion during WWII has the Allies and the Axis powers fighting in concert to save planet Earth. The novel opens when the protagonist, a young Chinese archaeologist, is forced by the Japanese army to raid an ancient tomb—the tomb of the mythical first king of China—where he discovers the true identity of the king and the origin of Chinese civilization.

If you love the adventure of Indiana Jones, the scary dragons in Game of Thrones, or the epic tank battles in WWII; if you like watching an all-out alien invasion of Earth, you will love Dragon Tomb. Try picturing a battlefield on which Germany Panzers are charging forward alongside the Soviet T-34s; behind them march Chinese infantrymen with bayonets mounted on rifles; above them fly American P-40s and Japanese Zeros. Not too far from them in the front stand the plasma-fireball-spitting dragons from across the galaxy. Although Dragon Tomb is listed in the category of history/science fiction on Amazon, it actually crosses several genres, including fantasy, alternate history, and time travel, to name a few.

In many novels/movies, aliens often appear as monsters without any individuality yet like to destroy human for no reason. My belief is that any intelligent extraterrestrial life form should be living in a society, probably like ours. Therefore, I decide to depict the aliens differently. In Dragon Tomb, they are individuals with unique personalities. They love; they hate; they eat; they pee; they have faith. Among all the alien characters I created, my favorite is the always-cursing Black-Fish. Please comment if you agree or disagree with me.

The ending was difficult to write because I wanted to provide a satisfying closure. Everyone knows how WWII ended and I don't intend to change that. I also didn't want to tell readers that good somehow prevails and the world in which Hitler and Tojo live magically becomes a better place, even in a fictional universe. In Dragon Tomb, former foes do put aside their hatred and fight for the survival of humans. However, human unity does not make the impossible possible. One by one, good characters die. Even though they have thrown in everything they have, the humans still fail. After one last attempt at the final moment of destruction, history happens as we know it and the protagonist becomes the only person with memory of that dark time. He decides to devote the rest of his life to protect the secret of the tomb and to prevent the Armageddon from reaching Earth again.

This is exactly how I came up with the series' title "The Last Resistance." Dragon Tomb is the first book of the pentalogy. Book two Resurrection will take place in the present time while the rest will go into the future.

For this book, an original theme song, "Every Day is a Monument," was created to convey the importance of human unity. Please check out the music video on YouTube and leave a comment if you like it.

If you like Dragon Tomb, please post a review on Amazon or recommend it to your friends on social media.

Video: Everyday is a Monument