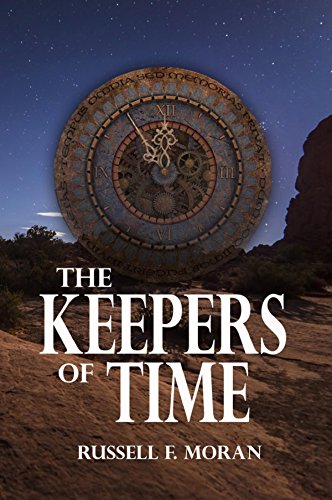 Book: The Keepers of Time (Book Five of the Time Magnet Series 1) by Russell F. Moran

about this book: If you love time travel and alternate history, The Keepers of Time is a book that will take you to a fascinating world, 200 years into the future. You will recognize characters from my other time-travel novels, starting with The Gray Ship, followed by The Thanksgiving Gang, A Time of Fear, The Skies of Time. Admiral Ashley Patterson and her husband Jack will become like old friends as they negotiate the world in different eras of time.

"Something's wrong. What's going on? This isn't right. Where the hell are we?" Ashley said to Jack as they stood on an open walkway of the USS Ronald Reagan. The ship was cruising off New York's Long Island when the beautiful scenery suddenly disappeared."

Admiral Ashley Patterson and her husband Jack have done it again. They've time traveled—this time 200 years into the future—aboard a nuclear aircraft carrier, the USS Ronald Reagan, Ashley's flagship. Ashley, a tall, beautiful African-American woman, is the youngest admiral in the United States Navy. She married a wealthy writer and journalist, Jack Thurber. Married for four years, they love each other's company, and each other. Ashley got permission from the Navy for Jack to accompany her on a deployment. The senior brass is fond of Jack, who is also a lieutenant in the Naval Reserve, for the many positive articles he's written about the Navy and Navy life. But their time travel has changed everything.

When they experienced the shock of crossing the time portal or wormhole, captain of the ship had a heart attack, so Admiral Ashley took command.

They discover a new world, a strange new world—a post-nuclear war world—It's an alternate history, radically different from what they'd expect, an alternate history that is both a beacon of hope, and a cry of despair. First they notice that Long Island is a vast wasteland inhabited by bison, wolves, and other creatures—everything but human beings. Then the ship steams around the rivers of New York City, a post-apocalyptic forest growing amidst what used to be sky scrapers. They cruise down the East Coast, looking for signs of humanity, and come upon what used to be Atlantic City, once a mecca of fun and gambling. It is now a depressing expanse of empty casinos, ravenous wolves, and crumbling hotels. There they find a newspaper preserved in plastic. The headline on the front page of The New York Times read:

The date on the newspaper was April 12, 2018, a few months after the Reagan began its deployment.

But what year is it now? A metallurgist on the ship inspects the remnants of a bridge—The Verrazano- Narrows Bridge, which once connected the New York City boroughs of Brooklyn and Staten Island. He estimates that the melted remains of the bridge's towers are over 200 years old. It was evidence of a nuclear war—200 years ago.

Ashley and her trusted officers, including Jack, encounter a group of people who call themselves The Keepers of Time, an organization dedicated to preserving history and culture. The people dress and sound as if they lived in 2018. That's the idea, the head of The Keepers explains. They are dedicated to preserving history before the nuclear apocalypse. The organization is located at the beautiful old resort, The Greenbrier, in the former West Virginia.

But as much as the Keepers of Time have advanced, culturally and intellectually, the surrounding people in what was once known as the United States of America, have reverted back to a primitive and savage past, one that includes human sacrifice.

Ashley and Jack know they have to have to get back to the present to warn the government of the unspeakable horrors that await. They have seen the alternative history, and it isn't good.

But finding the way back to the present is their greatest challenge, an almost insurmountable one. They know they have to pass over the wormhole to go forward in time to 2018, but the sea bottom has changed. They were almost aground at high tide when the Reagan hit the wormhole. Without sufficient depth to maneuver the ship, Ashley, Jack, and the entire crew may have to start their lives over—200 years in the future.

"A wild time travel yarn that starts fast and doesn't slow down until the end."