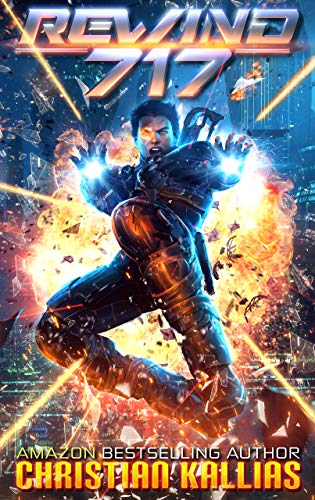 about this book: My new Science Fiction book deals with terrorism in the future (cyberpunk setting) and time travel. In this case the protagonist must stop a nuclear bomb from obliterating New Geneva in the year 2175. It's a post world war III world, one where only a handful of megacities have survived. Rewind Agent Cole Seeker can jump back 717 minutes in time thanks to a special marker in his DNA, to prevent terrorist attacks from ever happening.

Aided by his trusty Artificial Intelligence brain augment TAINHA, he embarks on a mission to save everyone's lives in New Geneva after a nuke gets blown up in New Geneva. Soon he discovers that not everything is as it seems and he will be faces with both demons of his past as well as choices he never though he'd have to deal with.

After releasing 6 books (5 novels and one novella) in the space opera genre in the form of the best selling Universe in Flames saga, I wanted to write something different. A standalone story, that could, if there is enough interest, be continued. But unlike my other books this one actually ends (no cliffhangers).

In order to challenge myself a little, I wrote this book at the first person, unlike my other books (3rd person POV). I felt more connected to what happened to my protagonist that way and it was an interesting experience.

Cover wise I decided this time around to hire a professional artist. We've collaborated on the cover, I provided a 3D render of the main character and armor as well as it's pose and the very talented Tom Edwards did the rest, painting an incredibly detailed futuristic city and action scene. I've done the lettering myself, being accustomed to usually do my own covers (I have more than 20 years experience in Photoshop and I've done multiple digital artworks and illustration before turning my sight to writing).

I tried to infuse a good dose of action in this book. It's mostly a roller-coaster with very little time to breathe and it should really appeal to people who like old school action movies (think Die Hard, Demolition Man, Last Action Hero,... etc). I've also tried to tackle with an important subject: freedom. As time goes by, with the social media explosion and security restriction, our freedom as human being, or at the very least our privacy, is not what it used to be. So question around that subject are raised in the book.

I'm also a huge fan of the series 24 and the character of Jack Bauer. Especially how he will risk everything and do whatever it takes to save the most lives, even at great personal cost. Some of that is infused in the Cole character. To rejoin the top secret Rewind Agency he had to make sacrifices of his own, as he does when he is deployed back in time to save the day. Chances are if you enjoy 24, you'll enjoy Rewind as well. Just like in 24 be prepared for some graphic violence (incl. a torture scene).

I've always loved movies that take place in a future Earth setting, like the ones mentioned earlier or Blade Runner, Judge Dredd, I Robot and more. So choosing a time frame for this book was a no-brainer.

I'd like to thank all my readers for their loyalty and their kind words. It warms my heart every time I receive messages from them telling me how they enjoyed (or sometimes not :D) my books. Don't hesitate to contact me if you want to discuss anything, I always try to reply to every mail I receive (though I sometimes I miss some).

Also if you'd like to get advanced Review Copies or simply review copies of my books in exchange for a fair review, don't hesitate to visit my website and contact me. I'll have the book of your choice sent to you for free in no time.