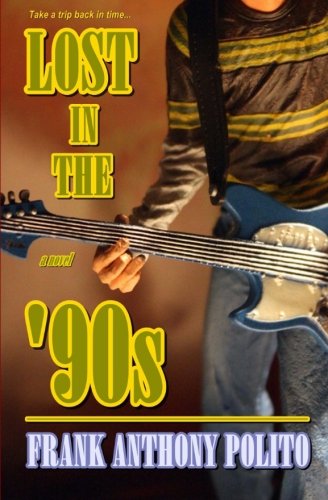 Book: Lost in the '90s by Frank Anthony Polito

about this book: "Lost in the '90s" is the story of a teenage wannabe rock star named Kurt Peregrin. On the night of April 7, 2012, Kurt's band, The Pogs, is playing at his high school's "Lost in the '90s" dance. During "Smells Like Teen Spirit" by Nirvana, Kurt dives off the stage in to the mosh pit, hits his head on the floor, and blacks out. When he wakes, he discovers he's traveled back in time eighteen years to 1994. Soon after, Kurt meets up with his parents, but realizes they are not a couple. It's now up to Kurt to help his mom and dad realize they love each other, so that they will get married and he can be born.

While similar to the '80s movie, "Back to the Future," the inspiration for this book came from the teen novel "Hanging Out with Cici" by Francine Pascal, author of "Sweet Valley High" which I read when I was in junior high. The story is about a girl from 1979 who travels back to 1944 and meets her 13-year-old mother. Growing up, I always wondered what it would be like to meet my parents when they were kids themselves.

After an entire year, my agent wasn't able to find a publisher who believed that readers would take interest in a story set in the 1990s -- so I published the book myself under my own imprint, Woodward Avenue Books. I hope that together we can prove them wrong!