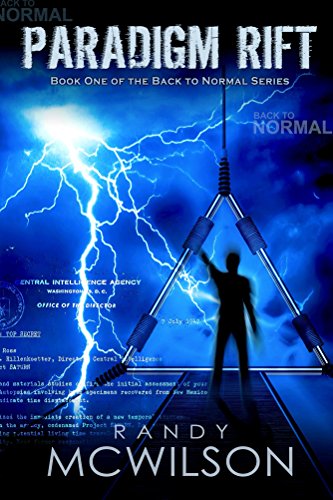 Book: Paradigm Rift - Book One of the Back to Normal Series by Randy McWilson

about this book: There are two things you need to know about time travel. First, it's impossible. And second...it's terrifying.

And then twice more in that same year.

And they kept coming.

Involuntary time Jumpers from different decades in the future began arriving to the quintessential college town of Normal, Illinois. The locals naturally imagined that these new arrivals were simply out of towners. No one suspected that they were from out of time. A failed experiment in 1947 during an intense electrical storm on a ranch outside of Roswell, New Mexico tipped off their remarkable existence to an emerging American intelligence community. Soon, the geopolitically-opposed forces of the CIA and a KGB assassin would begin hunting down the motley assortment of time Jumpers.

The tempting prize of apprehending a person with knowledge of future events would easily tip the balance of world power. But will the time Jumpers find a technological breakthrough to allow them all to return to their respective time zone before they are located and exploited, or worse?

If you enjoy the early Cold War period of history, with a cast of engaging characters reminiscent of the hit TV series LOST, coupled with a tale of espionage, betrayal, sacrifice, and bound together with several mysteries that will keep your gripped right to the end of the fourth book, then the Back to Normal series is YOUR series.