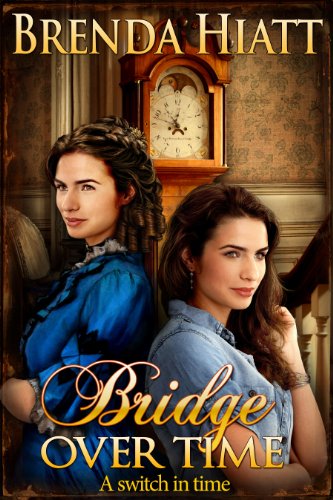 about this book: A switch in time!

Kathryn Monroe, busy activist and socialite, humors her mother by agreeing to attend her costume ball at the ancestral mansion in South Carolina. What she doesn't admit, even to herself, is that she actually looks forward to a break from the frenetic pace of her increasingly shallow lifestyle. She gets much more of a break than she anticipated when she passes the grandfather clock on the landing, on her way downstairs to the party, only to be transported to 1825, where she is mistaken for the girl who would become her great-great-great-great-great grandmother! Even more shocking, she finds herself falling for a man her counterpart despised.

Catherine Prescott feels increasingly trapped as her parents try to push her into an unwanted marriage and pile restriction after restriction upon her activities in their efforts to turn her into a proper young lady. But on her way downstairs to an important social function, she passes the grandfather clock on the landing and discovers herself in the twenty-first century, where it appears everything she ever dreamed of--and more--has come true. To make this amazing new world even sweeter, she seems to have found her soulmate in a man her identical descendant never cared for.

But will capricious Fate allow each to find happiness in another time?

A few comments from reviewers:

• "This is one of the best time travel romances that has been written in ages." — Affaire de Coeur magazine

• "The only disappointment is when it ends — you wish it could have gone on longer—this book cries for a sequel!" — RomEx reviews